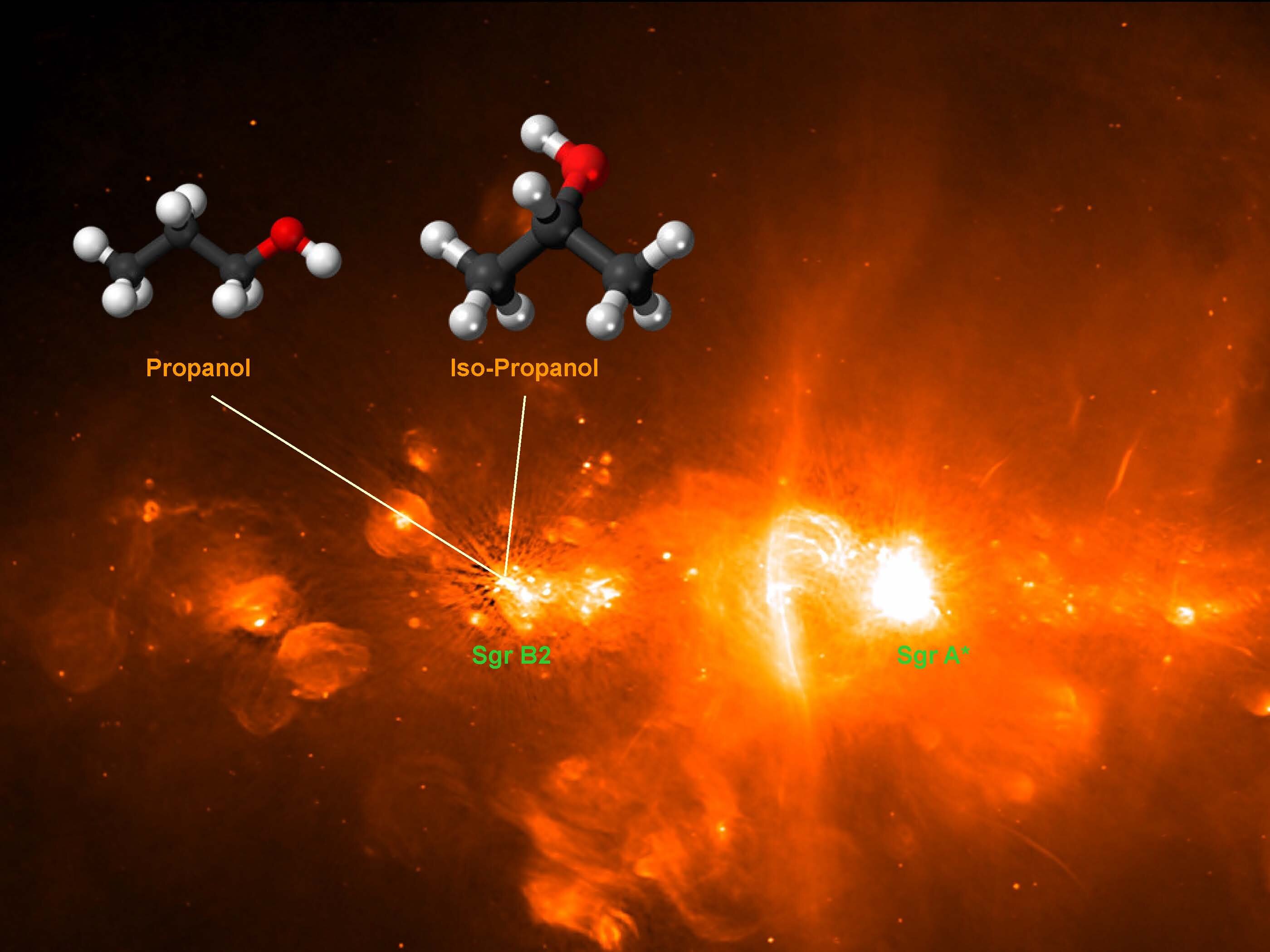 A disinfectant in the Galactic Center region

An international group of researchers led by Arnaud Belloche (MPIfR, Bonn, Germany) reports the first identification of iso-propanol in interstellar space, a substance used as a disinfectant on Earth. Isopropanol is the largest alcohol detected to date, demonstrating the growing complexity of members of one of the most abundant classes of molecules to be found in space. The identification was made possible thanks to observations of the star-forming region Sagittarius B2 (Sgr B2) near the center of our galaxy where many molecules have already been detected. It is the subject of an in-depth study of its chemical composition with the ALMA telescope in Chile.

The search for molecules in space has been going on for more than 50 years. To date, astronomers have identified 276 molecules in the interstellar medium. The Cologne Database for Molecular Spectroscopy (CDMS) provides spectroscopic data to detect these molecules, provided by many research groups, and has been instrumental in their detection in many cases.

The objective of this work is to understand how organic molecules are formed in the interstellar medium, particularly in regions where new stars are born, and how complex these molecules can be. The underlying motivation is to establish links with the chemical composition of solar system bodies such as comets, as delivered for example by the Rosetta mission to comet Churyumov-Gerasimenko a few years ago.

An outstanding star-forming region in our galaxy where many molecules have been detected in the past is Sagittarius B2 (Sgr B2), which is located close to the famous source Sgr A*, the supermassive black hole at the center of our galaxy.

“Our group started studying the chemical composition of Sgr B2 more than 15 years ago with the 30m IRAM telescope,” explains Arnaud Belloche of the Max Planck Institute for Radio Astronomy (MPIfR) in Bonn/Germany, the lead author of the detection paper. “These observations were successful and notably led to the first interstellar detection of several organic molecules, among many other results.”

With the advent of the Atacama Large Millimeter/submillimeter Array (ALMA) ten years ago, it became possible to go beyond what could be achieved towards Sgr B2 with a single dish telescope and study A long-term study of the chemical composition of Sgr B2 was initiated by taking advantage of the high angular resolution and sensitivity provided by ALMA.

So far, ALMA observations have led to the identification of three new organic molecules (isopropyl cyanide, N-methylformamide, urea) since 2014. The latest result of this ALMA project is now the detection of propanol ( VS3HsevenOH).

Propanol is an alcohol and is now the largest of this class of molecules that has been detected in interstellar space. This molecule exists in two forms (“isomers”), depending on the carbon atom to which the hydroxyl function (OH) is attached: 1) normal-propanol, with OH attached to a terminal carbon atom of the chain, and 2 ) iso-propanol, with OH attached to the central carbon atom of the chain. Isopropanol is also well known as the key ingredient in hand sanitizers on Earth. Both propanol isomers in Sgr B2 were identified in the ALMA dataset. This is the first time that iso-propanol has been detected in the interstellar medium, and the first time that normal-propanol has been detected in a star forming region. The first interstellar detection of normal-propanol was obtained shortly before the ALMA detection by a Spanish research team with single-dish radio telescopes in a molecular cloud not far from Sgr B2. The detection of iso-propanol towards Sgr B2, however, was only possible with ALMA.

“Detecting the two isomers of propanol is particularly powerful in determining the mechanism of formation of each. Because they look so similar, they physically behave very similarly, which means that both molecules must be present in the same places. at the same time.” says Rob Garrod of the University of Virginia (Charlottesville/USA). “The only open question is the exact quantities that are present – this makes their interstellar ratio much more precise than it would be the case for other pairs of molecules. It also means that the chemical network can be tuned much more carefully to determine the mechanisms by which they form. »

The ALMA telescope array was essential for the detection of both propanol isomers to Sgr B2, thanks to its high sensitivity, high angular resolution and wide frequency coverage. A difficulty in identifying organic molecules in the spectra of star-forming regions is spectral confusion. Each molecule emits radiation at specific frequencies, its spectral “fingerprint”, which is known through laboratory measurements.

“The larger the molecule, the more spectral lines it produces at different frequencies. In a source like Sgr B2, there are so many molecules contributing to the observed radiation that their spectra overlap and it is difficult to disentangle their fingerprints and identify them individually,” says Holger Müller of the University of Cologne where laboratory work, particularly on normal propanol, has been carried out.

Thanks to the high angular resolution of ALMA, it was possible to isolate parts of Sgr B2 which emit very narrow spectral lines, five times narrower than the lines detected on a larger scale with the 30 m IRAM radio telescope. The narrowness of these lines reduces spectral confusion, which was essential for the identification of the two isomers of propanol in Sgr B2. ALMA’s sensitivity also played a key role: it would not have been possible to identify propanol in the collected data if the sensitivity had only been half as good.

This research is a long-standing effort to probe the chemical composition of sites in Sgr B2 where new stars form, and thus understand the chemical processes at work during star formation. The objective is to determine the chemical composition of star formation sites, and possibly to identify new interstellar molecules. “Propanol has long been on our list of molecules to look for, but it was only through recent work done in our lab to characterize its rotational spectrum that we were able to robustly identify its two isomers,” says Oliver Zingsheim, also from the University of Cologne.

Detecting closely related molecules that differ slightly in structure (such as normal and isopropanol or, as was done in the past: normal and isopropyl cyanide) and measuring their abundance ratio allows researchers to probe specific parts of the chemical reaction network that leads to their production in the interstellar medium.

“There are still many unidentified spectral lines in the ALMA spectrum of Sgr B2, which means that there is still a lot of work to be done to decipher its chemical composition. In the near future, the expansion of ALMA instrumentation towards lower frequencies will probably help us to further reduce spectral confusion and possibly allow the identification of additional organic molecules in this spectacular source,” concludes Karl Menten, director at the MPIfR and head of its millimeter astronomy research department and submillimeter.

The ReMoCA imaging spectral line study performed with ALMA at high angular resolution and the results of a recent spectroscopic study of propanol were used to search for the iso and normal isomers of the propanol molecule in the hot molecular nucleus Sgr B2 (N2) in the vicinity of the galactic center. The interferometric spectra were analyzed under the assumption of local thermodynamic equilibrium. The reaction network of the MAGICKAL astrochemical model has been extended in order to explore the formation pathways of propanol and to place the observation results in a broader astrochemical context.

Related studies have been published in Astronomy & Astrophysics.

Provided by the Max Planck Society

This document is subject to copyright. Except for fair use for purposes of private study or research, no part may be reproduced without written permission. The content is provided for information only.