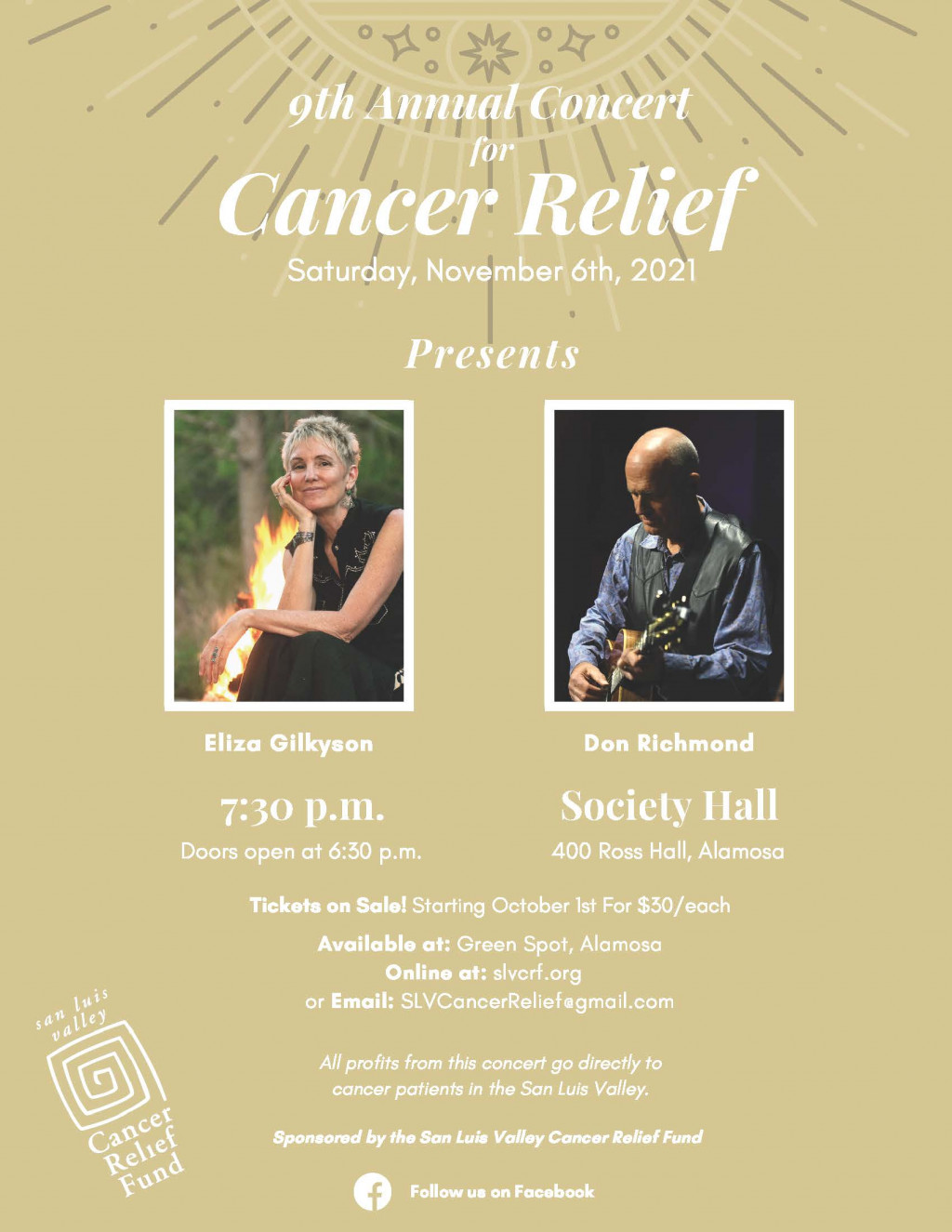 Alamosa News | 9th annual concert for the fight against cancer

Eliza Gilkyson will join Alamosa’s Don Richmond for the 9th Annual Cancer Relief Songwriter-Songwriter Concert on Saturday, November 6 at 7:30 p.m. at Society Hall, 400 Ross Avenue in Alamosa. Doors open at 6.30 p.m. The concert benefits the San Luis Valley Cancer Fund. Tickets cost $ 30.00 and can be purchased at The Green Spot in Alamosa, online at www.slvcrf.org or by email at [email protected] . This event has sold out for the past six years, so be sure to purchase your tickets in advance. Ticket holders will have the option to stream the concert live online this year to watch from near or far at home. More information will be available at the time of purchase.

Eliza Gilkyson is a two-time Grammy-nominated singer-songwriter and activist (2006/2015) and one of the most respected musicians in Folk, Roots and Americana circles. His songs have been covered by Joan Baez, Bob Geldof, The Conspirare Choir, Tom Rush and Rosanne Cash and have appeared in movies, PBS specials and on prime-time television. A member of the Austin Music Hall of Fame and inducted into the Austin Songwriter Hall of Fame, she has won countless Folk Alliance and Austin Music awards, including 2014 Songwriter of the Year.

Eliza’s most recent release, “2020,” is a collection of songs that lights up the emotional roller coaster of 2020, looking to the future in a world that is hopefully more just and sustainable. . Recently named No. 1 Album of the Year on the FAI Folk Radio Music 2020 charts, the album features the political anthem “Peace in Our Hearts”, which was written as a rallying cry to be sung at rallies and events. steps, and was the winner. of the “Song of the Year” award at the international Folk Alliance conference in 2021.

Eliza’s next album “Songs From the River Wind”, produced by Don Richmond, will be released in January 2022 on Alamosa’s Howlin ‘Dog Records label. Check out the single “At the Foot of the Mountain”, which was just released in October, written after Eliza bought her century-old hacienda which sits at the foot of the Sangre De Cristo mountain range in Taos. For more information, visit www.elizagilkyson.com.

Don Richmond has been a professional stage musician for over fifty years. He regularly plays and records on more than a dozen instruments, including electric and acoustic guitars, mandolin, violin, viola, dobro, pedal steel guitar, banjo, harmonica, accordion, trumpet and percussion. He is an award winning songwriter.

Don owns and operates Howlin ‘Dog Records, which has recorded and released hundreds of other recordings by many local, regional and national artists. Don was also Artist-in-Residence and Aesthetic Institute Instructor in the Colorado Arts Council’s Art in Education program. Don created and recorded the music for Roy Bedichek’s public television documentary Vanishing Frontier, the highly acclaimed civil rights documentary We Did It All Ourselves, and a film about the plight of Katrina refugees called Still Waiting – Life After Katrina. , which was broadcast nationally. in the fall of 2007.

In late 2004, Don published a book on performance psychology and creativity called Getting Your Music Past the Fear. He is also a regular contributor on creativity to the national radio show The Art of the Song. Don is currently a member of the board of directors of Crestone Performances, Inc., which produces the Crestone Music Festival, the Society Hall Foundation, which owns and operates the non-profit Society Hall performance space in Alamosa, and is a former member of the board of directors of Alamosa Live. Musical association. He also volunteers and supports many other local non-profit organizations. Don received an honorary doctorate in musical performance from Adams State University in 2014 and received the 2015 Governor’s Award for Creative Leadership in the State of Colorado. Don lives with his wife Teri McCartney a few miles from Alamosa, Colorado. Richmond has become a staple of the annual Cancer Relief Concert, having crossed the road to cancer himself. For more information, visit www.donrichmond.com.

The SLVCRF acts as a channel, raising money through fundraisers and memberships, then passing it on to local cancer patients through stipends of $ 300. Founded in 2006, the organization continues to grow every year. SLVCRF has provided hundreds of valley patients with more than $ 100,000 in relief. The Annual Concert Against Cancer is the organization’s biggest fundraiser of the year.

“It really touches me to be part of a wonderful organization like SLVCRF. It amazes me every time we donate one of our stipends that we are able to provide some relief and financial support to other members of our community who have been touched by cancer. We greatly appreciate all of our donors for their continued support. ”Says Sophia Avila, president of SLVCRF and member of the board since 2012. The SLVCRF is a completely voluntary organization with a dedicated board of directors of 7 members from across the valley who have themselves been touched by cancer and want to help others on this journey. Most of our funds raised come from individual / family memberships and fundraisers like the Concert for Cancer Relief.

Those interested in becoming members can send a check to the San Luis Valley Cancer Relief Fund, PO Box 1297, Alamosa, CO, 81101 or visit www.SLVCRF.org. Companies wishing to become concert sponsors can contact Sophia at [email protected] or at 719.580.2042. The deadline for corporate sponsorship is October 30.