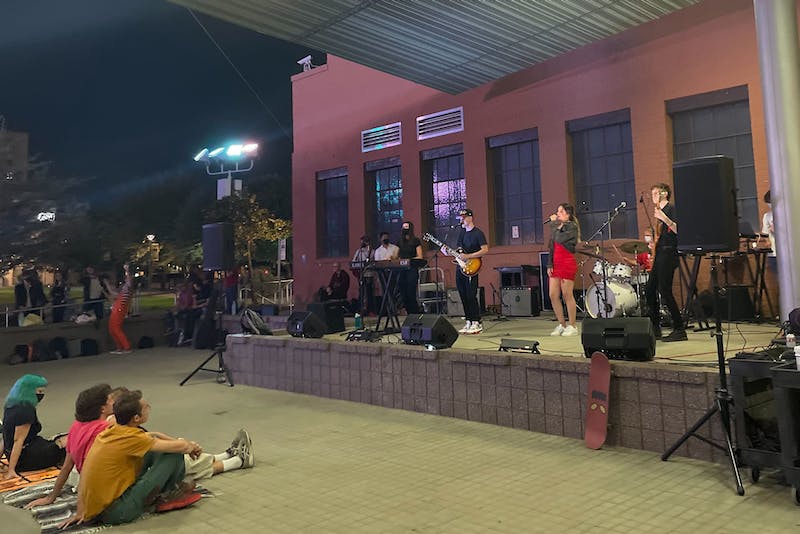 Performances from six student groups featured returning hits, including “September” and “Come Together”

ASU’s popular music ensemble class held their first concert on October 15 at Civic Space Park, the first of two this semester. The event had a retro feel, with each of the six performances featuring songs from the ’70s and’ 80s.

The popular music program, which falls under the Herberger Institute for Design and the Arts, launched in the Fall 2020 semester at Tempe and now offers classes at the downtown Phoenix campus.

The performers at the concert were students enrolled in the program’s popular music ensemble course, taught by associate professors Garrison Jones and David Oliverio, and instructor Raul Yanez, all of the School of music, dance and theater.

Each band played three songs, mostly covers of classic rock songs, and some members moved on due to the downsizing of classes.

Kiernan Marriott, a junior studying learning and teaching music, was the keyboardist for Velvet 220.

“During COVID this past semester, the pop music ensemble performed on the Tempe campus, and it was certainly more limited, especially since the virus was more severe at the time,” said said Marriott, who has taken the course twice before.

â€œThis semester we had a little more leniency where singers were able to remove their masks if they were vaccinated and used their own microphone,â€ Marriott said.

The show and the course offered students the opportunity to break out of their comfort zones and play music in a collective, mixing their musical styles with those of others.

â€œI played guitar for the first song and ended up branching out and doing some really different stuff,â€ said Zach Smith, who uses Zach Montana as his stage name, a sophomore studying music. popular. “And then on the last one, I ended up going to a laptop and doing something that I had never done live, which is called live looping.”

Smith starred in The Oranges and generally creates work as a singer-songwriter.

â€œIt was a really good experience to be able to do this live … because I’ve never done it before, and it really took me out of my comfort zone,â€ said Smith.

While most of the songs were hits like Earth, Wind and Fire “September“, interpreted by Mango, there were modern tunes, such as the interpretation of Oranges by Dua Lipa”Physical, “and Burning Cherry’s take on”Redbone“by Childish Gambino.

â€œIt was originally just kind of a pop song,â€ Fichter said. “And then I worked on it a lot to make it more of an instrumental song with more guitar to adapt it to that, and find the right tempo that would work with everyone, and how it would sound great with the band.”

Fichter was the singer of the song and played the piano, and attributed the final version of the song to a combination of effort by the group. She also said the song fits the theme well due to its use of instruments.

â€œI really liked them all,â€ said Camy Rael, a sophomore business student who was in the audience. “They’re all different, so it’s fun to hear all theâ€¦ bands play.”

The common thread between the performers and the audience was the general eagerness to listen to the variety of performances during the concert, as many groups had not heard their colleagues perform beforehand.

â€œAt the start of the semester, we were on our own, doing our own thing,â€ Marriott said. “We didn’t really hear what the other bands were playing, and just having the opportunity to hear everyone else’s band play was the most exciting part.”

This is just the first gig among many, as the program has signed a pledge with the City of Phoenix to perform on the Civic Space Park stage, one of the course instructors said at the concert.

The next performance will take place on December 3, continuing the theme of returning to the 80s and 90s.

Continue to support student journalism and donate to The State Press today.