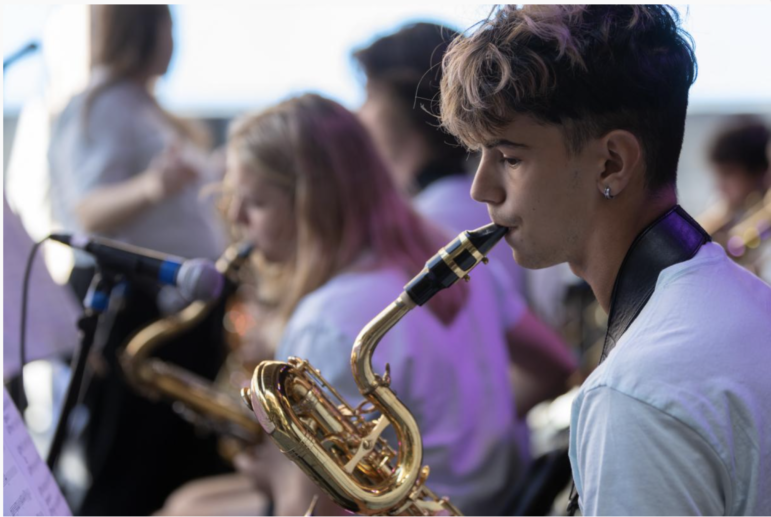 The third day of Jazz Fest was held in a relaxed atmosphere, as things seemed to calm down after the more chaotic first two days.

Now, I may be biased (I am), but I think the BHS Jazz Band is one of the best high school jazz bands in Monroe County. The highlight of their set was the closing song, “Hip Hop Bop Shop”, which was a fun jam that featured solos from many senior grads, including a lot of people I know, so it was great to have them see play.

Sunday was full of solo acoustic guitar performances; I came across three of them while walking around. The one I focused on was the virtuoso Andy McKee. A lead guitarist who always sounds like he’s playing three instruments at once, McKee’s guitar playing abilities go beyond what a normal human should be able to. The frequent percussive sounds he makes when hitting the body of the guitar make his hands look like industrial machinery. He’s able to squeeze so much power out of a single guitar, it’s unsettling. It was fun to marvel at McKee’s abilities, but I wish we heard more of his original work – half his set was covers. Despite this, he did covers of both Tears for Fears’ “Everybody Wants To Rule The World” and Toto’s “Africa”.

Champian Fulton was next on my list, a singer-songwriter pianist whose classical sound ushered in the sounds of jazz and blues legends like Cole Porter and Billie Holiday. I missed the set she did the day before with her trio, but I was able to attend her solo show at the Hatch Recital Hall.

Fulton is a gifted vocalist and pianist, capturing the personality-filled timbres of the eras she borrows throughout the set, while accompanying herself with dexterity. From the way she talks about the musicians who inspire her, it’s very clear that Fulton has a deep and serious dedication to music. My favorite quirk about Fulton as a performer is how she reacts to her own improvisations, often laughing as if surprised at what she’s playing. It really elevates the sense of joy and discovery you get when you hear someone experimenting on their instrument.

Next came Under The Surface, an intriguing Dutch folk group that had everyone in the Glory House glued to their seats in awe. Under The Surface has built its live sets around improvisation. Each set is completely improvised, so no performance from them will be the same. The band has a unique sound which is mainly based on Dutch folk music, but also borrows from jazz, ambient, rock etc. They skillfully craft an aesthetic and guide the audience through their poetic presentations. The startling new sounds, inventive vocal techniques and impeccable use of space make for an otherworldly meditative journey.

The band consists of drummer Joost Lijbaart, guitarist Bram Stadhouders and vocalist Sanne Rambags, but they are not just a drummer, guitarist and singer, they are all multi-instrumentalists in their own way. Lijbaart is seated at a drum set, and next to him is a table stacked with countless auxiliary percussion instruments, many of which I don’t recognize. He plays with these tools throughout the show, often finding creative ways to combine them or use them in unexpected ways.

Stadhouders sits with his guitar, in front of him is a pedalboard that bends his guitar sound to his liking, and next to him is a laptop with an open session of a DAW, where he creates delay effects and reverberation. Rambags is an expressive singer, constantly implementing physical movement in her performance. At certain points during the show, she used a curious instrument which I had to ask her about afterwards. It’s called a “waterphone” and it creates one of the most beautifully unnerving sounds I’ve ever heard from an instrument. A shrill crystalline sound that made me impulsively consider buying a waterphone for myself.

Three less, another six days! There have already been so many unforgettable performances, and we’re just getting started!

Ravi Coltrane played with silk-covered bricks that intentionally landed on the floor from the audience’s feet. It made you feel smart if you settled into that joy. I dug what I dug. Being in the presence of the bloodline was also a powerful hip. Coltrane, understood?

Then I needed to walk around and get some random stimulation and I came across RTs, who struck a pop chord with a new bang a la various sounds in bands like Squeeze, but this time with a version dandy from “You” by Lou Rawls. ‘Re Gonna Miss My Lovin.’ “Man, that was five-piece fun from the band that call themselves ‘the bands’ pizza. I was gonna have to keep my ears from now on. I mean, have you ever seen me eat some pizza ?

The headliner tonight at Parcel 5 was Australian guitarist Tommy Emmanuel. Now there are guitar masters out there. And geniuses and kings are not lacking. But this cat leaves them all in the dust while choking. He’s a guitar wizard who beats on his guitar with what appeared to be wooden spoons and bare fingers between the spanks of the board. He was playing totally out of the blue, switching his mind between the jazzy attacks of Lightnin’ Hopkins, new age jazz and Hank Williams I. Loops too. And despite my concerns with the sound, although huge and intense, it was beautiful. I think Emmanuel has 12 fingers…on each hand.

And, speaking of a flow of conscious connection with their instrument, there was Bill Frisell and his trio who played me in a perfect good night at the Temple Theater with a delicately creepy, rendered piece that looked like the music box disjointed in a horror movie, the kind that features little kids dragging you to hell. Although I think this guitar master had infinitely more divine intentions, going in the opposite direction. Amen.

The Beacon welcomes feedback from readers who adhere to our comments policy including the use of their full real name.