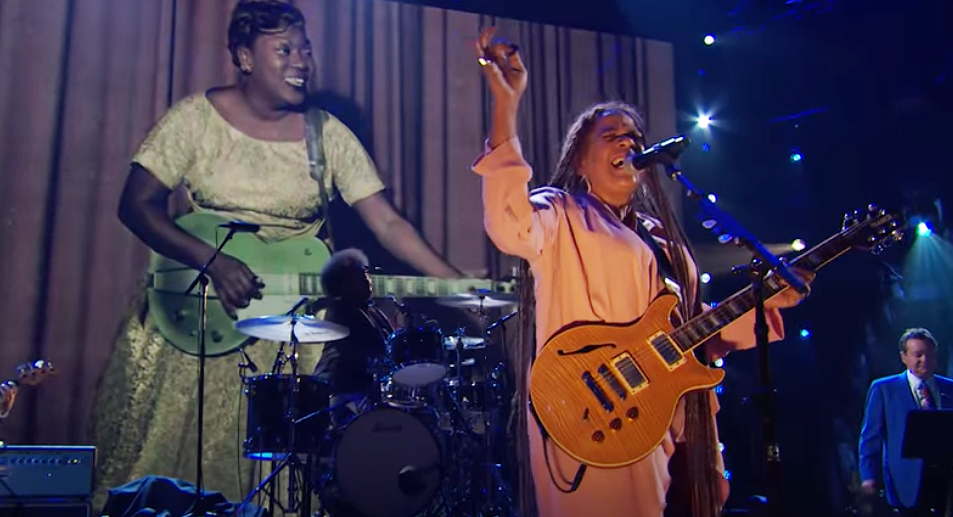 When Felicia Collins last performed on the Music Haven stage in Central Park in Schenectady, she wore a red t-shirt that read, “Music Is Everything.” It was 2015, and the guitarist with local roots had just completed a 22-year run with the CBS Orchestra, the house band of “The Late Show with David Letterman,” which aired its final episode that spring.

The talented Collins really played and sang like music was everything on her season finale show that summer, which mixed fiery blues, soul and funk to a Music Haven crowd filled with friends and relatives. Collins grew up in Albany’s Arbor Hill, where she acquired her first guitar from a pawnshop at age 12 and taught herself to play.

After graduating from Bishop Maginn High School in Albany, Collins moved to New York City, where the masterful self-taught guitarist continued to perform with such acclaimed artists as The Thompson Twins, Cyndi Lauper, Al Jarreau, Madonna, George Clinton , Whitney Houston, Aretha Franklin and more before landing the gig with keyboardist Paul Shaffer and his band on David Letterman’s late-night show.

Collins returns home to the Capital Region this Saturday for a free show dubbed “Bellbottom Soul” with her band The Variant, which features several top local musicians: guitarist Bobbie Van Detta; keyboardist Bruce Winn, percussionist Bob Halek; and keyboardist Azzaam Hameed, a longtime organist and pianist at Friendship Baptist Church on Union Street in Schenectady (who performed with Collins on his Music Haven show in 2015).

Starting at 5 p.m., the band plans to play until dusk, leading up to a giant screening of this year’s Oscar-winning film “Summer of Soul.” Ahmir “Questlove” Thompson’s documentary from The Roots features sublime, but previously forgotten, footage from the 1969 Harlem Cultural Festival, an incredible six-week series featuring performances by Stevie Wonder, Nina Simone, Sly & the Family Stone, Gladys Knight & the Pips, Mahalia Jackson, BB King, The 5th Dimension and more.

Collins’ pairing with the screening of “Summer of Soul” couldn’t have been a better fit. In 2018, after his tenure with the CBS Orchestra ended, Collins reunited with Paul Shaffer to perform with Alabama Shakes’ Brittany Howard and Questlove on drums as the ad hoc combo inducted Sister Rosetta Tharpe into the Rock & Roll Hall of Fame. in Cleveland, Ohio. .

Today jazz trio GNP livens up downtown Schenectady at lunchtime for Jazz on Jay, the free concert series held Thursdays in the summer at the corner of Jay and State streets. GNP is a class combo with Tyler Giroux on piano, Matt Niedbalski on drums and Dylan Perrillo on bass. The band got their start playing at Speakeasy 518 in Albany, a cocktail bar known for its Prohibition-era vibe. 12 p.m.-1:30 p.m.

The Meridian Brothers is an acclaimed band from Colombia that fuses futuristic electro-rock with more traditional Latin rhythms and genres. The five-piece band is the brains of Eblis Álvarez, a Colombian guitarist and composer who creates collaborations with invented bands while reinterpreting Latino-tropical styles with an experimental and theatrical touch. At The Colony in Woodstock (22 Rock City Rd.) on Thursday, August 18. 8 p.m.

Legendary Commander Cody, aka George Frayne IV, died last September after living for decades in Saratoga Springs. His group, Commander Cody and the Lost Planet Airmen, rose to prominence in 1971 when their single “Hot Rod Lincoln” became a national hit. On Sunday, former members of his band present a celebration of the life, music and art of the late Commander Cody at Hangar on the Hudson (675 River St., Troy). Original members John Tichy, now a professor at RPI, Bill Kirchen (Austin, Tex.), Andy Stein (New York City) and Buffalo Bruce Barlow (Marin, Calif.) will meet for the first time in the East. Coast since 1975. 6 p.m.
Contact Kirsten Ferguson at [email protected]

More from The Daily Gazette: