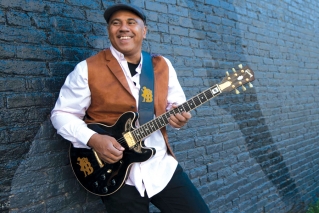 Chicago-based bluesman Ronnie Baker Brooks says he loves Maine’s enthusiasm for the blues. The musician is scheduled to perform on Sunday July 11 at the North Atlantic Blues Festival in Rockland.

Brooks made his first appearance at the North Atlantic Blues Festival in 2005. He returned to the festival a few years later with his father, the late blues legend Lonnie Brooks, and his brother, Wayne Baker Brooks, when they performed under the name of Brooks Family Blues Dynasty. .

Brooks first appeared on stage at the age of nine, playing guitar with his father. He launched a solo career in 1998, the same year he released his first LP “Golddigger”, produced by Janet Jackson. In 2000, Brooks was nominated for the Blues Music Award for “Best New Artist”.

I met Brooks for an interview where he revealed he was working on a new album, partially inspired by the weekly shows he played at home for fans watching online. He shared his affection for Maine and the enthusiastic audience here, and recalled his first appearance at the North Atlantic Blues Festival.

The edge of Maine: What memories do you have of the first time you played at the North Atlantic Blues Festival in 2005?

Ronnie baker brooks: I remember that day very well. Little Milton was in the lineup, and I wanted to stay in Maine and see him. I played earlier and it was a crazy day for me because I had another gig near Boston that night. Something seemed weird to me and I didn’t want to leave because Pinetop Perkins was right before Little Milton. I felt weird walking away from these guys because they were so much older and it ended up being the last show Little Milton ever played. I caught two flat tires on the way to Boston. The promoter didn’t believe me but it was true and I got in late and just said “Let me play for the people who stayed, you don’t even have to pay me.”

The edge of Maine: You spend so much time on the road, what have the last 16 months been like for you not to be able to perform in front of an audience?

Ronnie baker brooks: The pressure and anxiety of not having an income during this time almost drove me crazy. I was sitting playing guitar when my wife suggested I start playing live on Facebook. It was the best feeling, man. I ended up doing it every Friday and called it “Live From the Brooks Blues Basement”. It gave me just enough of what I needed to stay focused and inspired. So much so that I ended up recording a record this way.

The edge of Maine: Tell me about that. Have you set a release date?

Ronnie baker brooks: Not yet, we are still putting the finishing touches on it. It was co-produced by Todd Mohr of Big Head Todd and the Monsters. I’m happy with the way it’s going.

The edge of Maine: What do you think of Maine and the public here?

Ronnie baker brooks: I like it up there. Paul Benjamin has booked me in Maine for years now. He used to book me a lot at the Time Out Pub in Rockland. I have noticed that there are a lot of enthusiastic blues fans in Maine. Every time I play there they show us love and appreciation and I always look forward to coming back.

The edge of Maine: You are very connected to the blues scene and are a good person to ask, how is the blues going these days? I know we have a really good following here, but is it like that everywhere? As a genre, the blues seems to have cycles where it is doing very well. Do you see one on the horizon?

Ronnie baker brooks: Right now, I think the blues is in transition. Older blues men and women go by, I lost my dad over four years ago. We lost BB King in 2015. I see a lot of young blues players coming in and it’s exciting to see that they are passionate about it. If young players get exposure, they can ignite a younger audience.

I find myself sitting in a different seat these days. I’m the middle aged guy (laughs). I was the young man who hung out with my dad, Buddy Guy, and Junior Wells. I’m learning now that the blues will never die, and I used to worry about that because I saw all the older players I grew up around dying, but I see a lot of young blues musicians now. and that gives me hope.

The edge of Maine: The last gig I saw with my wife before the pandemic was Buddy Guy in Connecticut in November 2019. He was absolutely phenomenal. He turned this place upside down.

Ronnie baker brooks: He’ll be 85 this month, man. I saw his first show after the pandemic in May when he opened the new Hard Rock Casino in Gary, Indiana, about 30 miles from Chicago. Just seeing his face inspired me, but seeing him play and how he played blew me away. He came out like there had been no break at all, I couldn’t believe how good he was.

The edge of Maine: How many gigs have you played since live gigs started coming back?

Ronnie baker brooks: When I play at the North Atlantic Blues Festival this Sunday with my band, it will only be the third show we’ve played for a live audience since things have calmed down since the pandemic. After playing with my band on Sunday afternoon, we’re going to jam with Coco Montoya and play a tribute to Albert Collins. We had planned a tour together before the pandemic and only managed to play two shows before everything was canceled. I can’t wait to come to Maine, see some familiar faces and play with my band.

Bringin ‘it Backwards: Interview with Knifes