Get the latest Syracuse news delivered straight to your inbox.
Subscribe to our newsletter here.

Briana Gilyard immediately catches the attention of the room and her audience quickly sets in.

More than 100 people lined Livingston Avenue on Saturday night, but only a lucky few – around 75 – were allowed to see his show. As low notes of chatter and laughter simmer into a soft buzz, Xander Luke picks up his guitar and strums the chords of Gilyard’s opening song, “Comin ‘Thru”. Gilyard, known as BRI to her fans, flings her hair back over her shoulder and smiles broadly. The show begins.

Gilyard, a 19-year-old Syracuse University music industry major from Summit, New Jersey, said she has always been a performer. Her father is a pastor and her musical career began in the church choir. In high school, she starred in several musicals but never had any formal or technical training until she joined the League.

“It was a leap,” she said of choosing a major in the music industry. The singer-songwriter wanted to perform and develop his craft, and the League’s music community was going to help him do so.

Her music is a reflection of her personality, which Luke says is “fun” and “outgoing”. Gilyard’s audience danced to the jazzy and upbeat vibe of her music.

First year, Gilyard began to write songs in earnest. She admired others in her program, especially Sarah Gross, a senior musician and SU student. She credited Gross as her inspiration; Watching her perform on past house shows encouraged Gilyard to write more music.

Gilyard’s passion for his music influenced his work ethic and drive.

But Gilyard said coming to Syracuse was a great learning experience for her, as she received formal training in her major. Gilyard learned to play the piano and violin in elementary school and ended up learning to play the guitar when she arrived in Syracuse. Her curiosity and willingness to continue writing and acting has allowed her to grow as an artist, she said.

Throughout the pandemic, Gilyard has used Instagram Live to present performances and is now back to performing in small house shows. She wants to make up for lost time last year and dive head first into her music, she said.

However, his music is not limited to playing. Gilyard believes that the music she creates not only represents her own identity, but also speaks to many different and under-represented voices in the community. She wants to challenge the status quo of SU’s past and let her music diversify audiences. Finally, she knows the industry can change too.

“Being here, there are so many different types of people, especially musicians,” she said. “I like to make music, not specifically for girls, but for girls who have never been on top.”

Whenever I am with people who love music… I feel like I have grown as a person.

Gilyard’s long-term goals are simple. Going to the Grammys would be great, but this major accolade doesn’t show all the hard work and enthusiasm that led to success, she said. The Syracuse singer is focused on herself and her career one day at a time, and plans to record, perform and become a better artist overall.

Gilyard wants to work on branding and marketing to develop and retain its audience. Through exhibitions, social media, and contact with student organizations, she hopes to broaden the scope of her work. His motivations come from a sense of independence, and it shows.

The junior leaves no chord, note or lyric unnoticed. During rehearsals, she guides her collaborators and does not neglect any minor detail. While working with his choristers, they practiced harmony countless times until they solidified the mix of their voices.

Gilyard likes to engage with his audience and bring relativity through his songs. Her music explores tales of friendships, arguments, situations, and vibes across life, and her fans connect with simple yet powerful themes.

While playing, she commands the space and encourages her audience to engage with her. “Feel free to rock with me,” she told the crowd, as they sang, clapped and danced to her original hit song, “Better With You”.

“I love the times when you can tap into people in ways you never thought you could,” she said. “It really affects people in the long run.”

In her performance last Saturday night, Gilyard sang seven songs, including two covers of Destiny’s Child’s “Bills, Bills, Bills” and SZA’s “The Weekend”. But the majority of her songs were originals that she wrote both alone and in collaboration with other Syracuse students. 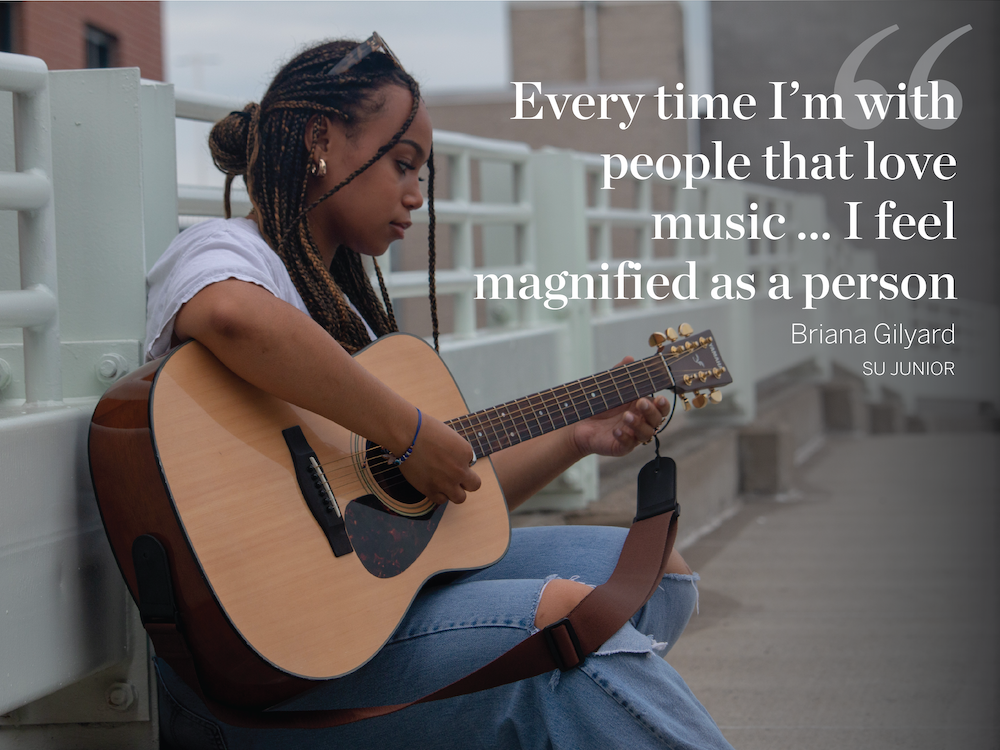 Gilyard expressed his appreciation and admiration for his collaborators. Luke, a major in the Brooklyn music industry, hooked up with Gilyard last year and helped her out last summer as she met producers in the New York borough. Luke writes and plays music, but also goes into production.

“I’m not too extrovert. I stay for myself, ”said Luke. “Bri is like the opposite.”

But Luke and Gilyard agree that their friendship and collaborations are a great mix between doing their own thing and working as a team.

Pulgar, a Bandier student who is also from Summit, New Jersey, collaborated with Gilyard to write her first song of the evening, “Comin ‘Thru,” and sang the first part of the music for the Saturday night show. The two have known each other since the age of 5 and feel linked both through music and Syracuse.

“I feel like we’re all building blocks of something bigger,” Pulgar said. “We all have a deep love for music, so whenever I’m around people who love music… I feel glorified as a person. “

Despite their success, young musicians try not to anticipate too much. Luke said that they would all continue and that opportunities would present themselves eventually.

“You can’t focus on this peak moment,” Gilyard said. “Why not just enjoy the process? “

After a long wait, the black pumas return to Portland for a two-night stand at…