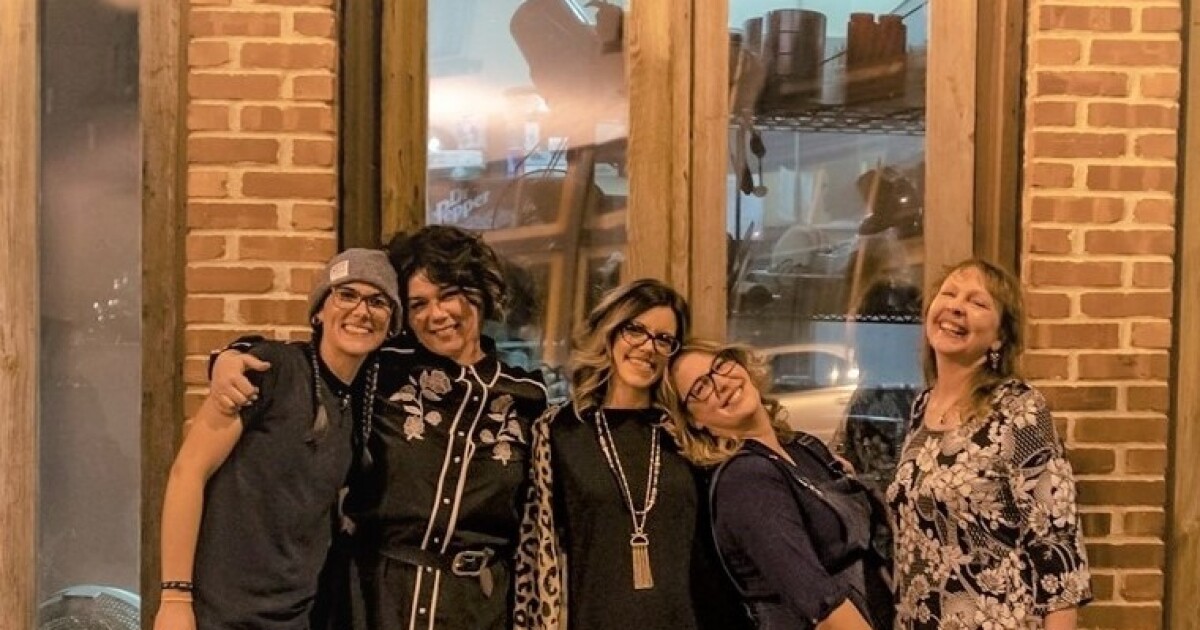 The nature of this conversation reflects their friendship with each other, as well as with the author.

MULLINS: There’s bass, there’s guitar, Jessamyn does some keyboards and adds some loops and some house beatboxing. And we do originals, we do covers. In fact, I play a bit of percussion, which is completely new to me. Just a little shaky swish or swish swish or jingle jangle.

BALISLE: I try so hard not to interrupt that with my laughter so that I can use it. I am really sorry!

REA: There’s a lot of giggles that you’re going to have to edit out here.

BALISLE: So when was the band really formed?

MULLINS: It was the year of our lord, nineteen – oh shit, not nineteen. It went well.

GRAVES: Above all, “It was the year of grace nineteen hundred…”

MULLINS: The year 2019. Would you like to hear the story?

MULLINS: Because it’s going so well.

BALISLE: I want to hear everything you have to say about this.

MULLINS: So we’re all musicians, of course, and we were all doing our own thing. Except that Betsey and I had played together as Layton Hollow Gals, who does the music for my dad, Mr. Johnny Mullins. Once in a while I would do a fundraiser for Care to Learn, or something for kitties and pooches. And I just had this idea and when I look back on it, I really think it was really kind of divine intervention because it came to me. And I was like, “Okay!”

It’s like, I want to do a fundraiser, and how do I get a lot of people to come to this? It’s as if we were going to form a diverse group. And so, I thought of Betsey first, of course. And then it’s like, you know, Melissa Rea, erhmygoodness. If I could get her to sing with us and contact her. Because, like, I knew Missy, ever since you sang it on my album and I went to see her play for Lily Bee and the Pollinators. I just had to take a rag with me to wipe the sweat off my forehead from watching these shows.

MULLINS: And she agreed. She liked the idea and Kunti, I had seen her at the Spokane Songwriter Festival. And I was like, “Man, she’s got that voice!” And then Jessamyn, I had seen her play, and really, I love what she does and she is unique. She is honest. She is talented. And I barely knew her, but I threw it at her and so the five of us decided, “Hey, let’s do this.” And then it’s like, well, why are we doing this? And I decided on a wonderful fundraiser for the Rebound Foundation. And we had our first show at Lindberg in November 2019 and packed up the place out!

REA: It was pretty obvious then that he was more than just a little songwriter in the round genre. I know I was really excited to share a stage with you all and wanted to collaborate with everyone if I could. And then it just snowballed into this thing. And we all really really love each other.

MULLINS: I remember the first rehearsal basically – it wasn’t even a rehearsal, it was brainstorming – everyone came to my house. And all of a sudden the energy was like, “Hey! Did you hear that High Women’s song? And we should listen to this one!” And, “Oh gosh, that song Emmylou Harris does!” Like Kunti, and Betsey and Melissa are already starting, it’s like they rehearsed behind the bushes before coming to my house! They just had this angelic sound with all these harmonies.

Balisle asked the Songbirds if this initial gig was intended to be a one-off show with them deciding to continue playing after the gig.

REA: Yeah, that’s pretty much after we were like, “Well, now we need a band name, I guess.”

GRAVES: It was love at the first gig.

Be sure to tune into Studio Live this Friday at noon for a performance by the Ozark Songbirds.