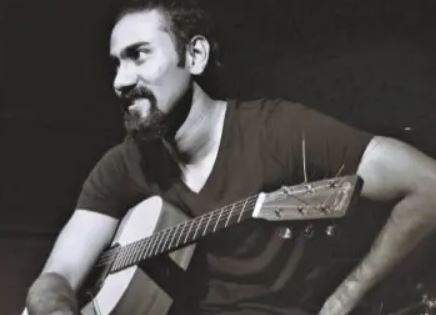 Hyderabad’s own Akram Ul Haq, a fingerstyle guitarist, is popular for his solo performances. He took up the guitar with zeal and passion, which brought him to the stage where he is today. We caught up with him before his performance at Coffee on the terrace Saturday, where he opened up about his love for the instrument, the fingerstyle performance he’s known for, the city’s music scene and more.

Having traveled with his acoustic guitar for nearly 15 years now, Akram remembers how he first picked up the guitar. “I just liked the sound and decided to learn how to play it. I never expected to master the art of playing it or even think that I would play it full time and make a career out of it. Slowly I realized that I was spending way too much time with the guitar and started to delve into his music. It took work to leave the usual aspects of life behind and give it your all, but it was worth it,” he says.

Akram then started playing in a band and took a 4-year western classical music course. He adds, “I kept writing my own music and that’s how I brought my stories from my life into my music.” Popular for its fingerstyle method of playing the guitarthe guitarist explains why he chose this over strumming the instrument: “For the simple reason that I’m a solo artist and need to incorporate the sounds of multiple instruments into my music. He explains, ” Thanks to this, I have a melody going and at the same time I use the body of the guitar to play drums while adding harmony to it. There is a lot going on with just one instrument. is like a band but with only one instrument.

For Akram, working towards perfection has never been a challenge, in fact, the willingness to express what he has learned and felt has driven him to improve. The one who has been teaching for a decade now is proud to be able to broadcast his music. He cites band Porcupine Tree and musician Gustavo as his inspiration, but is quick to add, “My friends have always inspired and supported me, even emotionally.”

Recalling some of the best compliments he received, Akram said, “I was playing in Bengaluru when some audience members came up to me and said my music was like healing for them. It’s good to know that your music has such power.

The guitarist loves the city’s current buzzing music scene. “Hyderabad lacked a kind of consistency earlier – great talent would come in, burst and grow, then soon fade away. Thanks to the pandemic, more bands are able to support themselves, giving audiences good options to choose from he says.

As he prepares to perform on stage, he reveals a bit about what it would be like: “I plan to keep it intimate because my music is completely instrumental and I look forward to telling stories through my songs and connecting with my audience.” Akram will soon be releasing his debut album which was due to be released in 2019. Titled The Cat Master, the album will be released on June 12th and is sure to take you deeper into his style of music.