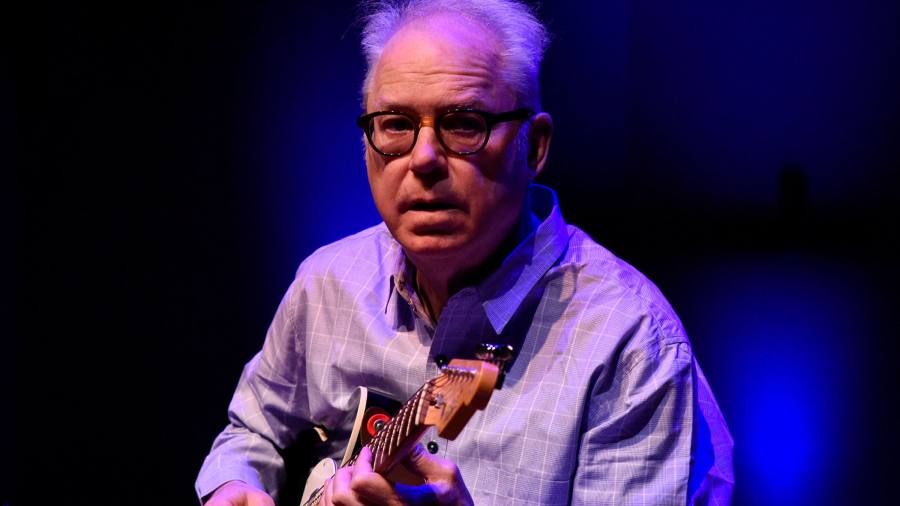 American guitarist Bill Frisell captures the dramas of everyday American life in pure, finely etched sound. This concert, a one-man show, showcased the essence of his tongue-in-cheek, sound-controlled approach over two barely interrupted sets – the only break was for a change of guitar. He performed seated, solitary and center stage, backed only by two small portable amps, and his vibrant sound filled acres of space.

Frisell’s repertoire is wide – here Duke Ellington and Thelonious Monk mingled with a James Bond theme, while his own songs referenced country music and a blues band. By the end of the evening, the guitarist’s sonic portraits had captured the strains of small town life as well as the isolation of individuals in city crowds. Both were delivered with humor, warmth, and a vague sense of menace.

This concert radically revisited his catalog of covers and original works and also launched his new biography. The first set opened with a sequence of isolated harmonics echoing ethereal through the room. Inquisitive strumming added warmth, a precisely curved note hinted at the blues, and then the melody of Frisell’s “Keep Your Eyes Open” shifted from high to low register. His first version of the song appeared on the country-infused album Nashville in 1997, but this performance followed the shimmering abstractions of the American version he released as a single two years ago.

As the track progressed, Frisell picked up the song’s build while following its clearly marked path. A suite of bells and whistles led to “Moon River”, split into snippets, stretched and pulled this way and that. Then a lament, “Poem for Eva”, unfolded majestically over the hissing sound of an organ.

As the play drew to a close, Frisell deliberately noodles, as if considering what to play next. Once he’s found his muse, a sudden rumble from the low register introduces “Strange Meeting,” a distilled semi-abstraction, and the first of two takes on the blues. The set ended with “Valentine”, fingerpicked in country blues style. “I’ll pull myself together and be right back,” he said.

Frisell switched to electric guitar for two Monk tracks – the seductive angularity of “Pannonica” and a raucous “Brilliant Corners”. “What the World Needs Now Is Love” followed, made poignant by sampled layers and an underlying drone. A thrilling “You Only Live Twice” closed the set, delivered in the low register without irony and with a hint of menace.

Frisell introduced his encore as “just a wee one, if I remember”. Brief, delicious and acoustic, the lullaby “Beautiful Dreamer” is also the title of her new biography.