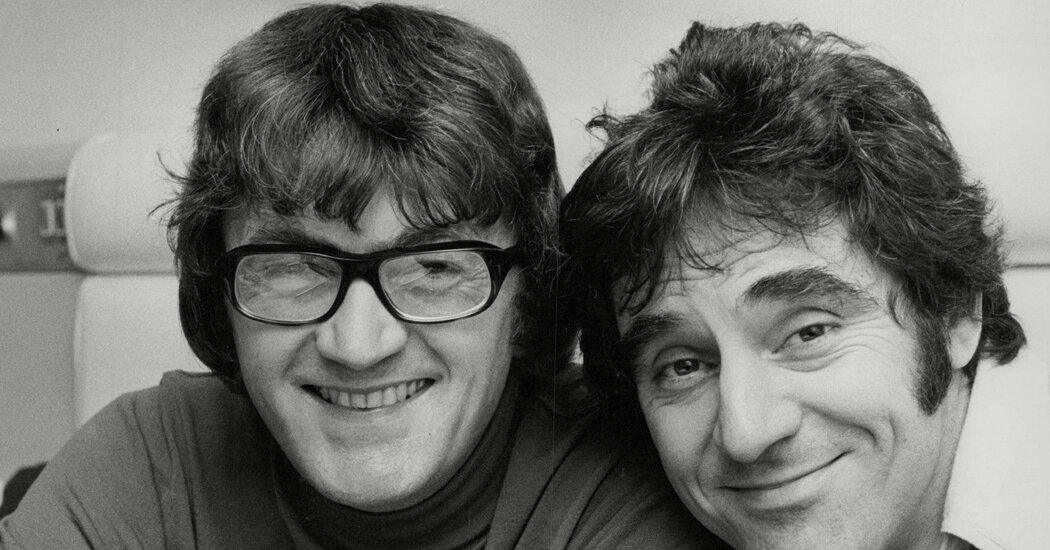 Leslie Bricusse, a songwriter and lyricist who has contributed to Broadway hits like “Stop the World – I Want to Get Off” and “Jekyll & Hyde” and to popular films like “Willy Wonka and the Chocolate Factory” and “Goldfinger “, died Tuesday. He was 90 years old.

The BBC said his agent had confirmed his death. According to reports, he died in Saint-Paul-de-Vence, France, where he had a house.

Mr. Bricusse’s songs, several of which were written with actor and singer Anthony Newley or other partners, have been recorded by a wide range of singers. Among the first was Sammy Davis Jr., who, during a performance in London in 1961, saw the Newley-Bricusse show “Stop the World”, which had just opened in the West End, and became an ardent fan. He won a Top 20 in America in 1962 with his version of a song from that show, “What Kind of Fool Am I?”

A decade later, Mr. Davis took Mr. Newley and Mr. Bricusse (pronounced BRICK-us) to the top of the charts when he recorded a largely unnoticed song from the musical “Willy Wonka and the Chocolate Factory” with the Mike Curb Congregation. (The film had been released the previous year with negative reviews.) The song was “The Candy Man,” and it reached No. 1 on Billboard’s biggest hit single pop and easy listening charts. career of Mr. Davis.

Another song from “Willy Wonka”, “Pure Imagination”, has been recorded by many artists, including Josh Groban, Maroon 5 and Barbra Streisand. Shirley Bassey was ranked in the Top 10 in 1965 with “Goldfinger”, the title track from the 1964 James Bond movie, for which Mr. Bricusse and Mr. Newley wrote the lyrics to the melody of John Barry. Another Bond film, “You Only Live Twice” featured a title song by Mr. Barry and Mr. Bricusse which was sung by Nancy Sinatra and later recorded by many others.

One of Mr. Bricusse’s biggest and earliest hits in his native England was a song some listeners might not even have realized he had played a role in: “My Old Man’s a Dustman”, a chart-topping novelty number recorded by Lonnie Donegan in 1960. Mr. Bricusse wrote it with Mr. Donegan and Peter Buchanan, but used a pen name, Beverly Thorn, “because I was afraid it was a low-end product, “as he told the Telegraph of Britain in an interview in January.

When Mr. Bricusse published a memoir in 2015, “Pure Imagination: A Sorta-Biography,” one of his several prefaces was written by his friend Elton John.

“His catalog of songs is huge – his endless accomplishments,” wrote Mr. John. “Someone who wrote ‘What kind of crazy am I? And ‘My old man is a garbage collector’ should be revered forever.

“I fell in love with the idea of ​​writing songs when I was a kid,” he told the Herald of Glasgow in 2016. “At first I thought I was going to be a journalist, but I was gradually fell in love with all these great writers like Irving Berlin and Cole Porter who were at the top of their game then. What was good about them too was that they were literate and they wrote songs from story.

As an undergraduate student at the University of Cambridge, he was active in the Footlights theater club, writing and performing musical comedy shows. Beatrice Lillie, a star at the time known for her offbeat musical, saw her work and was impressed, hiring her to be her comedy film in a show she was performing at the Globe Theater, “An Evening With Beatrice Lillie “.

“Aunt Bea kind of adopted me,” Mr Bricusse told the Sunday Express of Britain in 2017.

In 1961 he was working for Mrs. Lillie when Mr. Newley approached him to collaborate on what became “Stop the World”, a show about an Everyman character named Littlechap and the lessons he learned from birth. to death. Mr. Bricusse had free use of Mrs. Lillie’s apartment in New York, and Mr. Newley joined him there from England; they wrote the show in four weeks (or, in another account by M. Bricusse, eight days).

“We had a good thing in New York,” Mr. Newley told the Philadelphia Inquirer in 1961. “Nice apartment, no one to bother us. It went like cream.

The show, starring Mr. Newley, debuted at the Palace Theater in Manchester, England, in June 1961, then hit London, where it made its way, propelled by strong songs like “Gonna Build a Mountain” and “I Wanna Be Rich,” in addition to “What Kind of Idiot Am I? It opened on Broadway in October 1962 and worked there for over a year.

The two followed this up with “The Roar of the Greasepaint – the Smell of the Crowd”, a journalistic allegory on class struggle in which Mr. Newley again starred; he also did Broadway, in 1965. Decades later, Mr. Bricusse had two more Broadway hits: “Victor / Victoria” (1995), which he wrote the lyrics for (as he did for the film from 1982 on which it was based), and “Jekyll & Hyde” (1997), for which he wrote both the lyrics (Frank Wildhorn did the music) and the book. This book earned him a Tony Award nomination, his fifth.

He has been so successful in the world of cinema, and not just for the songs. He wrote the scripts as well as the music for “Doctor Dolittle” (1967) and “Scrooge” (1970), among other films. He then adapted the two into live musicals. His song “Talk to the Animals” by “Doctor Dolittle” won him an Oscar, and he shared an Oscar with Henry Mancini for “Victor / Victoria”.

In an interview this year with NPR’s “All Things Considered”, Mr Bricusse recalled that when he visited the set during the filming of “Willy Wonka” he was struck by the contrast between the treatment he was receiving and the clever production filmed on a neighboring sound stage: “Cabaret”.

“I was a little nervous about the amateur style of our show versus the professionalism of Bob Fosse,” he said.

Critics also found “Willy Wonka” to be a bit of a hobbyist, but it developed success over time, especially once it started appearing on TV and the music trickled into popular culture.

Mr. Davis’ hit version of “The Candy Man” was one of some 60 songs he recorded and which Mr. Bricusse wrote or co-wrote. One of Mr. Bricusse’s most recent projects was a musical about the life and career of Mr. Davis. A version of it was staged at the Old Globe Theater in San Diego in 2009, and Mr. Bricusse has kept refining it.

Mr. Bricusse’s survivors include his wife, actress Yvonne Romain, and a son, Adam.

In a 2015 interview with London publication The Stage, Mr Bricusse explained how he and Mr Newley, who died in 1999, worked.

“When I write a song, I hear the music and the words at the same time – one suggests the shape of the other,” he said. “And Tony was exactly the same. We sang to each other across the room; it was a very weird, unofficial way of writing songs.

He was nonchalant about his ability to work with a wide range of other writers and composers.

“I am a good collaborator: I have never quarreled with any of them,” he said. “Although there have been a delicate one or two that I won’t name. “