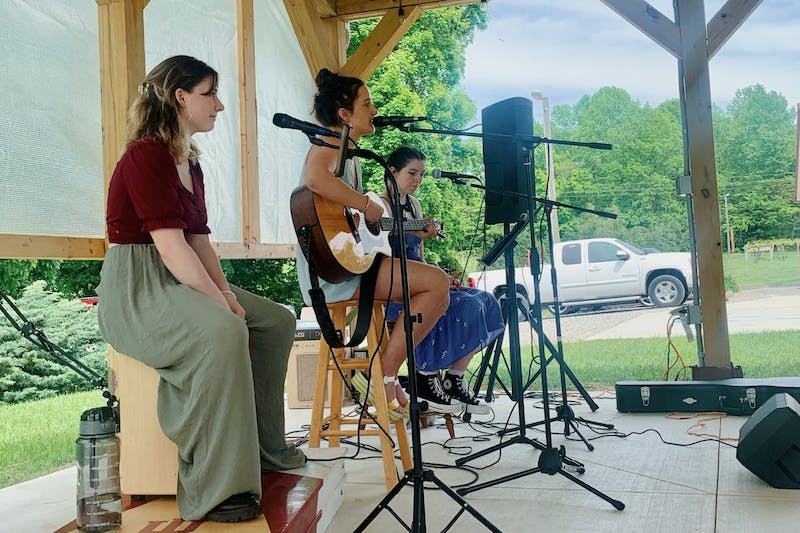 Local band Rain on the Rocks will perform a set of original music at 4:30 p.m. on June 23 at People’s Park. The show will be free and open to the public as part of the People’s Park Concert Series.

The trio consists of members Makenzie Snooks, Annie Stephens and Sydney Piercy. The group is new to the show scene, having formed in March 2022, although its members have played together occasionally in recent years.

Piercy, a recent Purdue University graduate, said she played solo gigs in high school, where she would invite Snooks to sit down for a few songs. The two continued to play together in high school, incorporating Stephens into the band through a church connection.

It was at one of those solo gigs that Piercy first heard about the People’s Park concert series, she said. An event planner saw her perform in 2021 at Butler Winery and then invited her to star on the show.

The band usually plays more covers than originals, but for the People’s Park gig, Piercy said he would introduce more original material.

“Normally we’re probably about 80 percent covers and 20 percent originals, but I think for this show we’re going to try to be about fifty-fifty,” Piercy said.

Rain on the Rocks currently has no recorded music available, but they do plan to record and release their original music. Piercy said the band had a smooth, stripped-down sound partly because of their size and instrumentation.

“Our music definitely has a very folk and indie rock feel to it,” Piercy said. “We’re an acoustic band with just drums, guitar and violin, so everything sounds a bit folksy. I would compare him a bit to the Lumineers, maybe a bit to Phoebe Bridgers.

Piercy said their inspiration came from a wide range of sounds, but that doesn’t hamper the band’s creative flow. She said Taylor Swift, dodie and Lucy Dacus were among the group’s influences, and their Instagram also cites Hozier, Radical Face and Jon Bellion.

Even with this long list of role models, Piercy said the band’s closeness as friends and skill as musicians allow the songwriting process to go smoothly.

“It really helps that I know them very well as people and have known them for a while,” Piercy said. “It takes a lot of the awkwardness out of making decisions.”