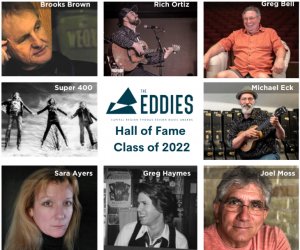 SARATOGA SPRINGS — Eight legends of the local music scene will be honored at an induction ceremony for the Capital Region’s Thomas Edison Music Hall of Fame Class of 2022. The event will take place at 6 p.m. on Tuesday, June 7 at Universal Preservation Hall.

Supreme master of musical knowledge and a great enthusiast as an A&E music scribe, Haymes shed light on activities in the area where it should be showcased, for all to see, and offered thoughtful encouragement to the musical ensembles of all kinds, including mine. He also helped me get my first songwriting gigs at TU, you don’t know. The memories are many: standing together while waiting for Neil Young to arrive on stage at SPAC; the gossip between readings at Bob Dylan’s birthday celebration at the old Union College Chapel in Schenectady; sharing a patch of Shepard Park grass as David Amram sailed beautifully in a collaboration between the TS Monk Sextet and the Glens Falls Symphony Orchestra during the Lake George Jazz Festival. The latter, in mid-September 2001, was the first time many of us had mustered the courage to gather in a public space during those restless and nervous days immediately following the 9/11 attacks.

In 2017, I hosted an event at the Saratoga Springs Public Library – “History of Rock and Roll: Saratoga and Beyond” which featured a panel of talented and gifted luminaries from across the region – Greg Haymes, among them.

First published, here is a partial transcript of what he said:

“August 10 is the anniversary of the first gig I played in Saratoga. It was with the band Star-Spangled Washboard. We played a few more gigs, at Caffe Lena, and within a year we played at the SPAC, opening for Sha Na N/A. A year later, in 1974, we played the Saratoga Fair. Do you remember the Saratoga Fair? It was at the Hippodrome, a 10 day fair in June. It was Mac Davis, Anne Murray, Johnny Cash, Bob Hope and Red Skeleton – the one I remember the most because we played on the same day. I remember him sitting in front of this little stand where he sold his paintings of clowns that he made. How cool is that? Tickets were $2.50 per day. $1 parking fee. Not too bad,” Haymes recalled.

“Star-Spangled Washboard Band lasted until about September 1978 and everyone split up and got ‘real jobs’. I worked in a record store – not a real job! And our bassist, Cheese Blotto, got a job as a bartender with his friends who had just opened a bar called 17 Maple Avenue.

“The Washboard band had split up, but we were still there. On a Friday a Saturday, one or two of us would show up. You never knew who was going to show up. We would play and whoever showed up would play. Eventually it coalesced into a band and we needed a name. We found the name Blotto. We created these little cardboard convention badges that said: Hello My Name Is. That became the title of our first record: Hello My Name is Blotto.

“Like I said, anybody would get up and play with us. There was one night, late at night, we were doing our third set or something. We were mostly doing 60s covers , offbeat stuff: Freddie & The Dreamers, Ballad of the Green Beret, Mother’s Little Helper – I’d pull out a medicine cabinet in the middle of the song and everyone was throwing pills all over the place. . So one evening there is a group of gentlemen coming in and standing in the back. Thick poodle hair. Satin baseball jackets with rolled up sleeves. It was like ’79. So naturally, we started making fun of them. It’s a group ? ahaha, it’s a Friday night and they’re not playing anywhere.

“Hey, do you want to get on and jam? So we did ‘House of the Rising Sun’ and ‘Johnny B. Goode’, because everyone does ‘Johnny B. Goode’, and I think we did too” We Gotta Get Outta This Place”. I think it was maybe four guys who came in, the drummer came, the guitarist. And they were pretty good! We were very impressed. After our set, it was time to say thank you, to wrap up the night and we asked who they were, Neil from the guitarist, Steve from the drummer… it was Journey, who had just finished playing at SPAC earlier in the evening. They were pretty cool at this subject.

“Two years later, I was at the Colonie Center, someone said, ‘Have you seen the poster?’ We were supposed to go to Spencer’s Gifts and in the back there were these poster shelves and there’s a Journey poster. They’re just kinda standing there. There’s green trees and white pillars and I’m looking at them, and… hanging from Steve Smith’s belt loop is a cardboard tag that reads, “Hello! My name is Blotto. What’s your?”

The ceremony will include live music, a presentation of a short video about each artist, and acceptance speeches. Tickets are $50 and are on sale at universalpreservationhall.org. Admission includes complimentary appetizers. A bronze plaque is placed on the wall of the Hall of Fame at UPH for each inductee, and a video about each inductee will loop there along with past, present, and future recipients.