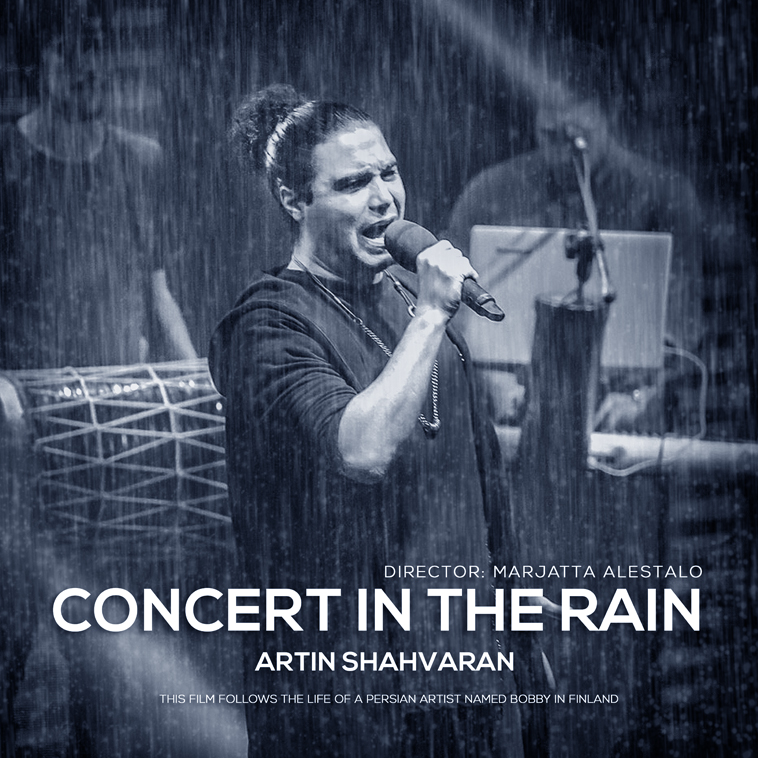 Persian singer and songwriter Artin Shahvaran has been singing and playing the piano since he was a teenager. It was only when he attended Tehran Conservatory of Music, he studied and learned classical music under the tutelage of eminent Armenian music teachers.

Known throughout the Middle East, Shahvaran has performed at numerous events in Turkey, Georgia, Dubai and Azerbaijan. He is currently the producer of the UAE’s biggest event show called “Puzzle Show”, which is filmed on an island known as “Kish” in the Persian Gulf near Dubai.

CelebMix met Shahvaran who will star in the upcoming Finnish film “Concert In the Rain”, directed by Matjatta Alestalo.

‘Concert in the Rain’ is a drama based on a true story, depicting strange and unexpected events that happen to an expatriate Persian artist (Shahvaran). The main character decides to immigrate to Finland on the recommendation of a friend, but is faced with unintentional heartbreaking experiences. Consequently, financial problems lead him to join a number of illegal gambling sites. Due to the financial turmoil and money laundering behind these websites, news of these practices is starting to hit social media networks and Persian media.

CelebMix: Thanks for sitting down and talking to us today, Artin. What is your most famous song in the Middle East?

Artin Shahvaran: Definitely ‘Maryam’, because it’s a song full of emotion. I’ve heard it play in most of the countries here in the Middle East.

CelebMix: What else can you tell us about ‘Maryam’ and what is it all about?

AS: I produced this song in 2010 and quickly became famous thanks to the number of singers from India, Uzbekistan and Turkey singing it in different languages. The title ‘Maryam’ refers to the name ‘Maryam’ which is a beautiful name used all over the world.

CelebMix: We are very interested in your career as a singer and songwriter. How did you first get involved in the industry?

AS: As a teenager, I could sing and play the piano (to some extent). Eventually, I attended the Tehran Conservatory of Music, where I learned classical music and, of course, how to improve my skills as a pianist. Under this tutelage, I was able to compose and arrange music, to finally release my first album “Mask”.

CelebMix: You also have an art background. What can you tell us about this?

AS: In 1996, I received an honorary doctorate in art from the University of Science and Technology of Iran. In recent years, I have taught in many music schools, instructing students in music used in film and animation. I have also participated in larger concerts with well known Persian singers such as Naser Abdollahi, as well as Arabic speaking singers.

CelebMix: What else can you tell us about ‘Concert in the Rain?’

AS: At the moment I am unfortunately not able to reveal the details, as the film is still in the filming phase, but we are waiting for more information soon!

CelebMix: How did you meet Matjatta Alestalo, the director of the film?

AS: After working with Mattila in the documentary “Marzia My Friend” (1996), I met Matjatta Alestalo, another Finnish director. After researching my artistic pursuits and my artistic character’s closeness to the main character portrayed in “Concert in the Rain”, he suggested that in addition to helping compose the soundtrack, I also consider playing the role. of the main character in the film. Of course, I accepted!

CelebMix: Can you share with us your acting experience? Or why is this role different from the previous roles you have taken on?

AS: Before this film, I had played in “The Night Of Doubt”, but the appeal of this new work, “Concert in the Rain”, was more important to me because of its connection to music.

CelebMix: What can viewers expect from the film?

AS: Some artists from Persian speaking countries migrate to other countries due to some restrictions in their own country facing many difficulties. After a while, they inevitably start to advertise unauthorized sites – a frequent behavior, unfortunately. In recent years, the theme of “betting” sites has attracted many young people to Persian speaking countries, but some of these sites operate illegally and use music and film artists for advertising. This film portrays the problems these artists face in some of these countries.

CelebMix: What can listeners expect from the upcoming “Concert in the Rain” soundtrack?

AS: After many hardships, the main character of the film, who is a singer, gives his concert in an open space, due to the COVID-19 pandemic. The sudden rain and people leaving the scene reflect an extremely dark and sad scene. The music in this part of the film is very moving and portrays a painful moment in time. A cry that cannot be seen in the rain, as he performs the song for the empty seats.