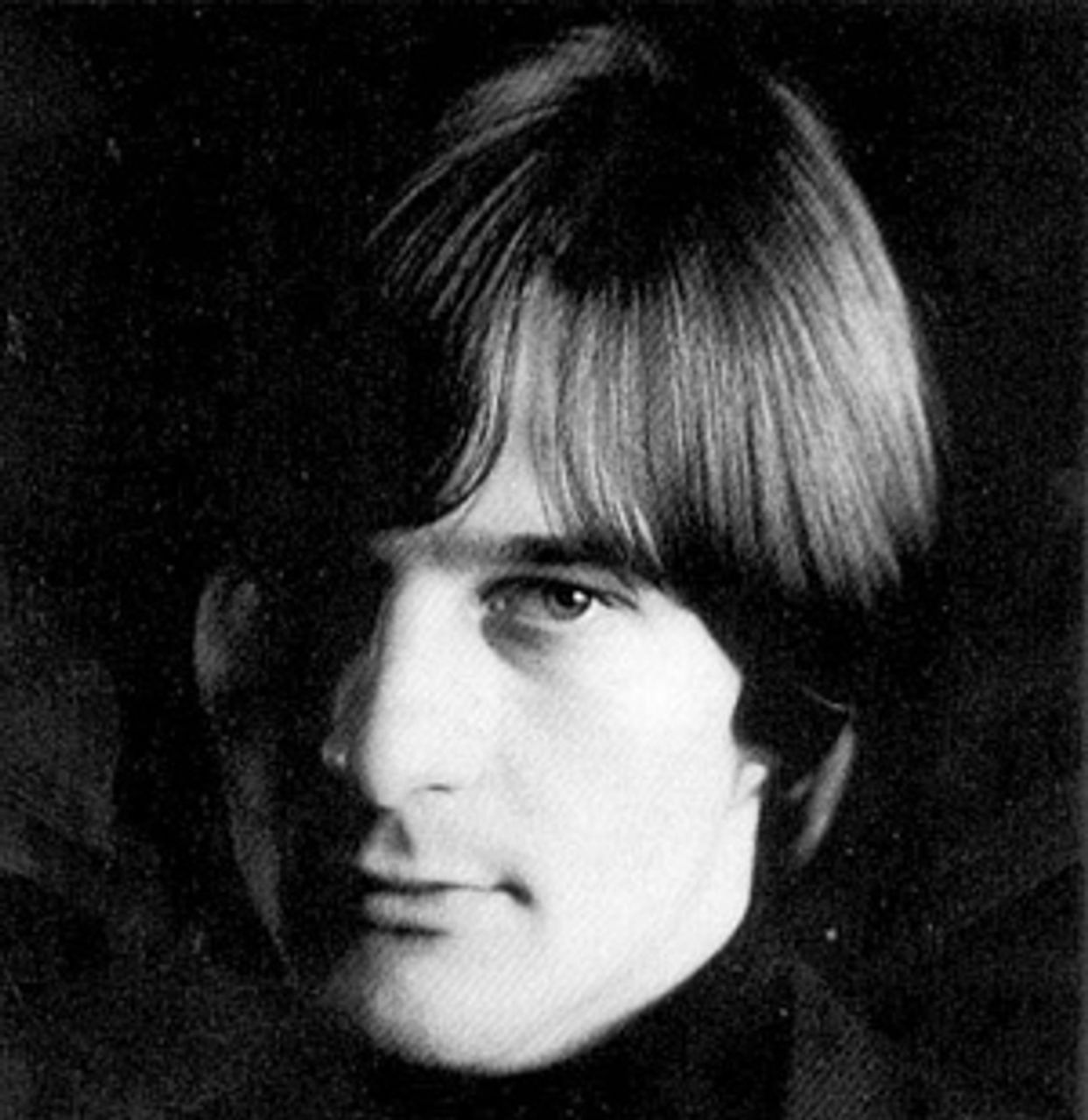 2021 marks the 30th anniversary of the death of folk-rock pioneer and co-founder of the Byrds (formed in 1964), Gene Clark. Clark was a key figure in the brief but influential period of the Byrds, which was instrumental in the expansive and electrified â€œpopâ€ turn of folk music in the mid-1960s. He also had an intriguing solo career in his own right. , before his life was tragically cut short.

Harold Eugene Clark was born in the small, working-class town of Tipton, Missouri, on November 17, 1944, the third of 13 children. In 1949, the Clark family moved to Kansas City, Missouri, living mostly in abject poverty.

However, in 1954 Clark’s parents saved enough money to purchase a television, through which young Clark would be introduced to Elvis Presley. In love with Presley, Clark developed a deep interest in music. His father then introduced him to Hank Williams and taught him to play the mandolin, harmonica and guitar. He started writing songs at the age of nine, his first song being “Big Chief Hole in Pants”.

During Clark’s school years, he joined various groups with classmates, played guitar and sang for fellow students, and formed his own folk trio called the Rum Runners, based on the popular Kingston Trio. However, his trio will be short lived.

Clark continued to perform in many budding folk groups in the early 1960s, most notably Michael Crowley’s Surf Riders and later the New Christy Minstrels led by Randy Sparks. Clark performed and worked as a backing vocalist for two albums with the New Christy Minstrels, before leaving the group in early 1964, disappointed with the musical approach.

Like many musicians of the day, a major turning point came in 1964 when Clark discovered the Beatles songs “She Loves You” and “I Want to Hold Your Hand” on a jukebox while in Canada. Clark found his calling saying, “I knew, I knew this was the future, that was where the music was going andâ€¦ I wanted to be a part of it.”

Clark moved to Los Angeles where he met another folk musician and Beatles convert Jim (later Roger) McGuinn at the Troubadour Club. In early 1964, McGuinn and Clark worked together as a Peter and Gordon type duo, but began to form a group – once David Crosby was recruited – known as the Jet Set. Soon after, Chris Hillman and Michael Clarke would join the trio on bass and drums, respectively.

Initially playing under the name Beefeaters, the young musicians released two singles, “Please Let Me Love You” and “Don’t Be Long” in October 1964. A month later, the group’s manager, Jim Dickson, made audition with the group. with Columbia Records, where they signed under the name Byrds and would soon be billed as “America’s Beatles”.

The Byrds have, in fact, become a key element in the development of the â€œfolk-rockâ€ sound. They basically bridged the electrifying sound of the Beatles’ pop studios with, literally at times, the lyrics and â€œedgeâ€ of Bob Dylan and other folk musicians. McGuinn’s “jangly” melodies for 12-string guitar, coupled with the expansive harmonization of Clark and Crosby, had very little precedent in popular music at this point. The group’s impact would help shape the direction of “folk rock” for at least the next decade.

Clark played a leading role on the band’s two albums in 1965, Mr. Tambourine Man and Turn! Turn! Turn! with his superlative compositions and emotionally seductive voice. Clark wrote or co-wrote many of the Byrds’ best-known originals from their first three albums, including “I’ll Feel a Whole Lot Better”, “Set You Free This Time” and “Eight Miles High”. At a time when the Vietnam War was raging, with anti-war and civil rights protests erupting across the United States, Clark focused on intimate matters. His lyrics emphasize personal reflection, reconciliation and relationships. He was also able to write moving songs about heartache, such as the band’s â€œHere Without Youâ€, set to its signature â€œcascadingâ€ sound.

Much of the Byrds’ success has come from their many inventive covers of Dylan’s tracks, in large part attributable to McGuinn’s revolutionary approach to the Rickenbacker guitar and the rich tenor harmonies of McGuinn, Clark, and Crosby. The Byrds’ debut album features four covers of Dylan, “Mr. Tambourine Man”, “Spanish Harlem Incident”, “All I Really Want to Do” and “Chimes of Freedom”, while their second includes two, “Lay Down Your Weary Tune â€andâ€œ The Times They Are Changing. “

Despite the enormous success of “Mr. Tambourine Man”, which peaked at No. 1 on the singles charts in 1965 in the US, UK and Ireland, and No. 2 in Canada, Clark abruptly left the group in February 1966, before the release of “Eight Miles High,” featured on Fifth dimension (1966), ostensibly because of his fear of flying. Clark, who had witnessed a fatal plane crash in his youth, suffered a panic attack on a plane bound for New York, which resulted in his refusal to take the flight. Indeed, Clark’s exit from the plane represented his departure from the Byrds, McGuinn telling him, “If you can’t fly, you can’t be a Byrd.” [bird]. “

Was his departure due to a fear of flying, a fear of success, a contempt for celebrity life and the music business, or something else? In fact, Clark became the richest member of the group for his prolific songwriting, sparking heightened resentment from his band mates. In a 2017 interview, McGuinn commented, â€œWe thought we could go on with just the four of usâ€¦ but Gene was the chick magnetâ€¦ Many years later Jim Dicksonâ€¦ told me a story of him and his co-manager Eddie Tickner, taking Gene away. aside with the idea of â€‹â€‹going solo, making him another Elvis or something. So maybe there was more than the fear of flying.

Coming off at the peak of group success indicates on Clark’s part, at the very least, an ambivalence or even an antipathy towards money and fame. In general, he seemed indifferent to commercial success, an indifference augmented by a reluctance to promote his releases.

On “The True One,” Clark writes about an inner war, brought on by his humble beginnings and success:

The following year, Clark released his first solo album, Gene Clark with the Gosdin brothers (1967). However, it would not be commercially successful, nor would its subsequent releases. While knowing this downward trajectory in terms of “success in the spotlight,” Clark has not expressed regret, at least publicly, about his departure from the Byrds. His â€œEchoesâ€ offer a sort of autobiographical image:

A year later, Clark and famous Dillards banjo player Doug Dillard would form an iconic duo, Dillard & Clark. His first album, Dillard & Clark’s Fantastic Expedition, was released in 1968 and the second, Through the morning, through the night, in 1969.

After the disbandment of Dillard & Clark, Clark resumed his solo career, releasing the pensive country albums. White light (1971) and Roadmaster (1973). His fourth album, No other (1974), featuring legendary bassist and session musician Leland Sklar on his title track, would cement Clark’s reputation as a masterful songwriter:

Clark was going to record three more albums: Two sides to every story (1977), Firebyrd (1984) – republished posthumously in 1995 under the title This Byrd flew away, with additional tracks â€” and So rebellious a lover (1987), with Carla Olson.

In an interview in 2004, Crosby said: â€œ[H]We just wrote down exactly how he felt, and I think he had a freedom about it that made some amazing music. â€¦ Gene was never made for this man [the Hollywood star system]. If Gene had gone to Nashville instead, he probably would have been a big star because he was good looking, a good looking young man. A good singer and a good writer and he had charisma, you know? He was a good guy. “

Clark’s last live performance would be with the original members of the Byrds after the band was inducted into the Rock and Roll Hall of Fame in January 1991. The Byrds came together in a disappointing final performance, playing their most notable hits. Clark died only four months later.

Interviewed in 1991 just days after Clark’s death, Hillman said, â€œWe lost Gene the other day. It doesn’t matter how or why. He’s just gone. I think we lost Gene in 1967.â€¦ At one point he was power in the Byrds, not McGuinn, not Crosby – it was Gene walking through the stage curtain banging on a tambourine coming like a young Prince. Valiant.

Clark is credited with founding baroque pop and the fusion of country with rock. Clark’s insightful compositions reflected the moods he wanted to convey. His words focused on betrayal, loss, self-reflection and life experiences. As Clark said, “I can’t make up a song.”