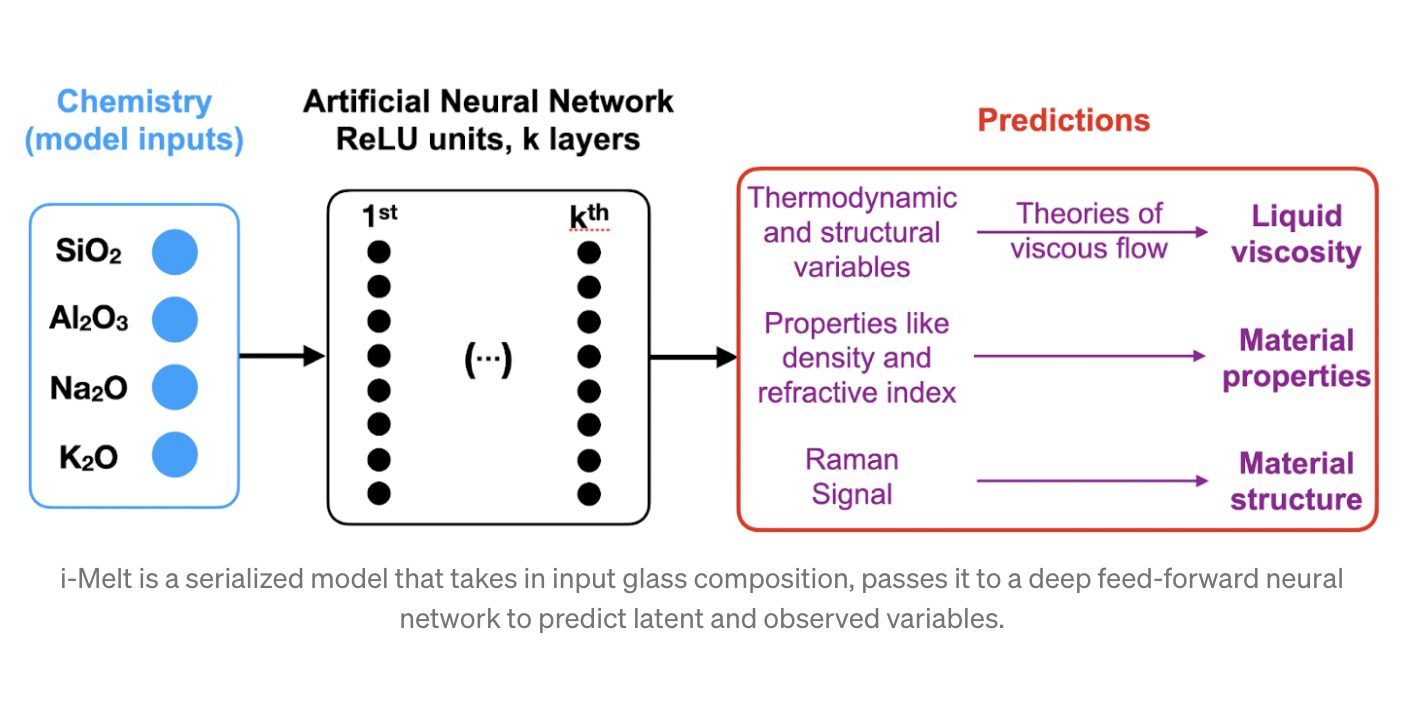 Researchers Develop i-Melt: A Deep Neural Network That Can Predict Glass Quality Based on Melt Composition

Glass is all around us. It’s in our computer screens, our next-generation batteries, our medical implants and even our volcanoes.

Glass is made by melting something and then cooling it quickly. The chemical composition of the molten liquid determines the physical qualities of glass. By alternating these properties, it is possible to control the strength and clarity of glass, how it reacts to chemicals and whether it conducts electricity by adjusting this composition.

We can create a glass that meets our needs for any specific use, such as a new smartphone screen. However, this has traditionally been done through an expensive and time-consuming trial and error process. Machine learning has the potential to revolutionize glass design.

Researchers at the University of Paris, Australian National University, Carnegie Institution for Science and Durham University introduce a physics and chemistry-based deep neural network called i-Melt, which can predict effectively the qualities of the glass depending on the composition of the melt. It is a gray box model that integrates established physical equations and thermodynamic principles as well as learning correlations. This ensures relevant and realistic results.

Researchers are using a database of experimental observations to train i-Melt. The results suggest that the model can predict a wide range of properties, including melt viscosity, glass density, optical refractive index, and Raman spectra of glass.

i-Melt is built using PyTorch. The great flexibility and power of the framework made it easy to build models that included physical equations and machine learning, as well as experimenting and testing various approaches. The ability to easily switch from GPU calculations to CPU calculations allowed the team to take advantage of the new DANTE compute cluster at IPGP, University of Paris, which is equipped with NVidia A100 GPUs.

The i-Melt prototype focuses on glasses made from four different ingredients: oxides of sodium, potassium, aluminum and silicon. The viscosity of molten glass varies considerably within this system (from -2 to 14 log Pas). The results show that i-Melt successfully predicts it with an accuracy of better than 0.4 log unit.

i-Melt can be used for various purposes such as:

The team has so far worked with the class of glass “aluminosilicates”, the main ingredients of which are oxides of aluminum and silicon). They are expanding i-Melt to a wider range of compositions due to their successes, including oxides of magnesium and calcium, which are essential in both volcanology and glass research. In addition to that, they aim to incorporate more physical properties into the predictions. They also plan to use the versatility of PyTorch to study other machine learning methodologies, such as Gaussian processes, by combining the capabilities of GPyTorch and Pyro.