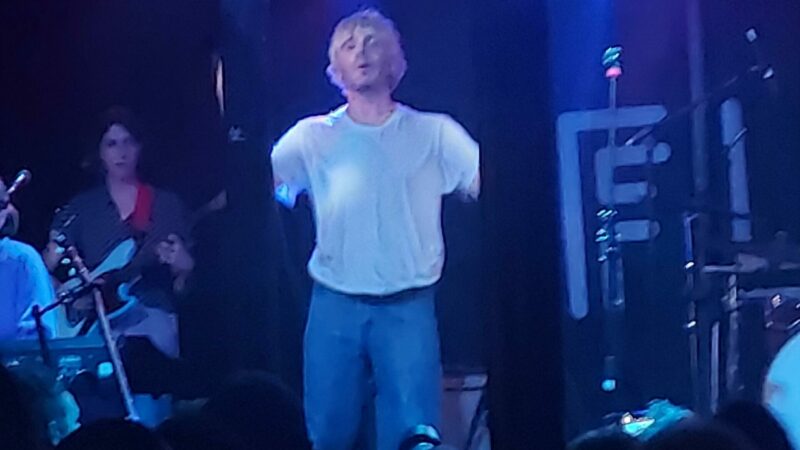 Tim Burgess, cherubic singer of baggy britpoppers The Charlatans and hero of the locked listening party, walks on stage at Fleece and adjusts a nice striped cardigan.

His seven-piece band gathers around him, he picks up a microphone, looks at it like he’s never seen one before, and says “Hello. We will play you good music”.

There is no stadium-shaking intro tape. There are no fancy lasers and lights. There’s no ghost boxing, Jagger-esque bluster.

When is a pop star not a pop star? Pretty much now.

What unfolds over the next 70 minutes is almost certain to have been a disappointment for some. The rowdy boys in the bar (please, for the love of John Peel, stop chatting during the gigs!) clearly came over to drink and sing 90s hits.

They look completely puzzled for most of the night and start screaming into each other’s ears, arms around their shoulders, knuckles dragging on the floor. This is, in large part, their downfall.

Simply because, you see, this star-studded pop star brimming with wonderful indie pop songs. In the years leading up to Britpop, some incredible records were made. they were loud and melodic, slightly ramshackle and beautiful.

Burgess has harnessed this and made records that may not be organ-driven groovers, but are imbued with a sweet charm.

On Lucky Creatures a small piece of quack keyboard breaks through and pure pop ba-ba-bas ricochet. Both songs explain exactly where this evening is going to go. The choruses are subtle and haunting, the songs rickety little bites of joy.

As these songs build, it becomes apparent that the band Burgess has around him is pretty amazing. They are billed as the All Star Band and that is precisely what they prove to be.

One of them is violinist, Helen O’Hara, best known as the violinist of Dexy’s Midnight Runners, and she adds textures and flavors to almost every song. Even though she stands in the shadows, she totally shines. She takes great pop songs, like The shopping center Where Only took a yearand perfectly complements that distinctive Burgess voice.

Oh my heart is swept away by a tide of piano, keyboards (thanks to Julian Cope/spiritualized legend Thighpaulsandra) and O’Hara’s fiddle and leads directly to the one moment Burgess becomes a pop star with a capital P.

The only one I know is not retained for the recall, it is right in the middle of the set; throbbing, grooving, throbbing. This is definitely the hit single those rowdy bar boys want to hear.

It would be foolish to pretend there was a better track playing all night. There were none. However, the final track was Empathy for the devil and, if anything could come close, then this was it. An unbalanced and absolutely sublime slice of sunshine, an authentic pop song performed by an authentic pop star.

Listen to the latest Bristol24/7 Behind the Headlines podcast: