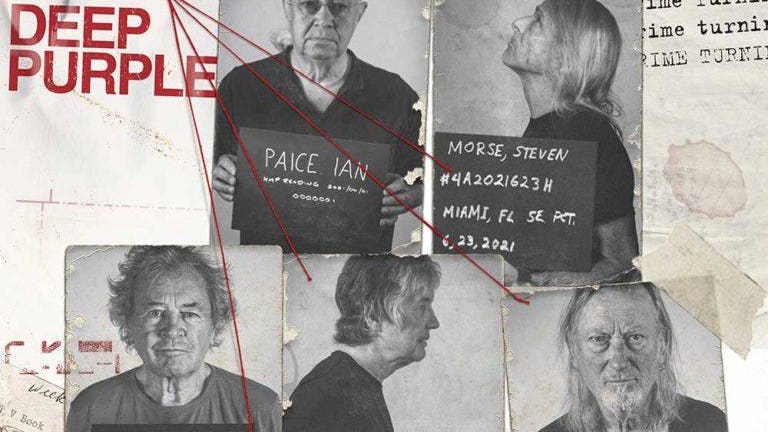 With live performances off the table for nearly a year and a half in the midst of a pandemic and a pair of rescheduled tours, English hard rock mainstays Deep Purple have entered a remarkably creative period.

New album released today Turning to crime, the group’s 22nd, marks their second studio album in 15 months, a clip they haven’t recorded on since the early 1970s.

As the 2020s Phew! consisted of original songs, Turning to crime consists of covers, a ridiculously fun affair that gives a touch of Deep Purple to everyone from Ray Charles to Bob Seger.

The new twelve-piece collection was born out of necessity. Deep Purple, which has sold over 100 million albums, usually records with new songs born out of live jam sessions. But in the midst of the pandemic quarantine, getting together was difficult. This time, producer Bob Ezrin presided over the edits from demos recorded in home studios.

â€œThe whole idea was born during the confinement. We didn’t want to twiddle our thumbs or anything. What can we do? Said longtime Deep Purple bassist Roger Glover. â€œIt was a challenge to get the sound. But Bob was a brain. When he did the mixes he just made it sound like we were all in the same room.

I spoke with Roger Glover about the recording Turning to crime, putting a unique twist on familiar songs and a February back to the road for Deep Purple. A transcript of our telephone conversation, slightly edited for length and clarity, follows below.

Evolution is a word frequently associated with Deep Purple. Even on a project like this, the idea of â€‹â€‹tackling covers is a first for the band. How important is this idea of â€‹â€‹evolution for this group?

ROGER GLOVER: Evolution. Yes, I guess we are evolving all the time. We live all the time – day to day. And you can’t go back.

And this is a first for us. We have already covered songs of course. “Hush” was a cover. But making a cover album with the intention of playing with them and having a little fun with them is very new to us.

How did you go about selecting these songs?

RG: The whole idea came during the confinement. We didn’t want to twiddle our thumbs or anything. What can we do? We thought about doing a jam like Zoom or something – but it didn’t go very well. And we couldn’t write songs. Because we don’t write songs for Purple. We just jam together. This is where songs are really born – they come out of jams. But we have to be together to jam. So we couldn’t write. Well, we’ll let other people do the writing. We will cover songs. Then all we have to do is run it.

So we started to think. Bob Ezrin was our kind of conductor if you will. We’ve had all kinds of conference calls. We all started to give ideas. We had about 50 ideas of things we could cover. But we weren’t just covering them directly. We wanted to add something to them, mauve them if you want.

So from those 50 songs, we basically voted. We are a very democratic group. And what you get is recorded.

I know you usually record live together. It seems that was not possible this time around. How did the registration process go?

RG: We did it remotely. After the songs were chosen, a few of us in the band made demos of them – me, Steve Morse and Don Airey. We sat down with a drum machine and some keyboard or guitar parts, or whatever, and did a very basic demo – which sort of went to a pool in Nashville run by Bob Ezrin and he l ‘distributed to all the people who needed to do solos or this and the other. Since we all have home studios – nowadays your computer is a home studio – this is how we did it. And it took a while to do it.

The only person who didn’t have a home studio was Ian Gillan. So somehow we had to find a studio somewhere where we could do all the vocals after all the backing tracks were done. After several attempts, and without any movement, there was really nothing we could do. Eventually Bob Ezrin called Peter Gabriel on the phone and we got a studio in England. It was a home studio of sorts, it wasn’t Ian Gillan’s home studio that’s all. But I flew to England in April and met Ian Gillan. Four days in the studio and we started singing really fast.

It was a challenge to get the sound. But Bob was a brain. When he did the mixes he just made it sound like we were all in the same room.

I remember Ian Paice telling me this Phew! set up fairly quickly, that it was recorded in about six weeks. How long did this album last?

RG: Well, much longer. Once you’ve done the demo, you have to wait at least a few weeks – the guitar parts come in and the keyboard parts come in. So it probably took about six months.

We kind of had a deadline. We really wanted to release it last summer – because it’s kind of a summer album. It’s upbeat and fun. But that couldn’t happen due to the pandemic slowing down again.

Obviously some of the songs on this album are songs that fans have a certain level of familiarity with and are used to hearing in a certain way. How do you go about taking songs like that and making them truly your own?

RG: Really using your imagination. We have great respect for the originals – because that’s the song. This is how he was born. But the other part is playing with it – and we do it with love.

Steve and Don have made incredible arrangements. I remember when I first heard Steve’s version of [Fleetwood Macâ€™s] “Too bad.” It’s pretty similar to the original recording – and then suddenly it goes into space. It was like, “Wow!” And that’s really what we were trying to do.

Not all songs are that harsh. Take “Watch the flow of the river”. I was doing “Watching the River Flow” and I didn’t really want the blues version that Bob Dylan did with Leon Russell. I just wanted a different feel. And I just knocked on it.

I actually kind of wanted it to be a kind of ska beat. I thought it would be quite original. But Paicey said, â€œI don’t play ska. Sorry. “He plays what he plays. But it’s great. It was a lot of fun to do, I have to say.

“Oh good” and [Huey â€œPianoâ€ Smithâ€™s] “Rockin ‘Pneumonia and the Boogie Woogie Flu.” More of the Freddie King in the closing medley. There are certainly some bluesy moments on this record. Was there a concerted effort to kind of flex that muscle, show off that part of the group?

RG: The blues are there. Rock and roll is based on that. You cannot do without it. But, no, we haven’t thought of anything like that. We just chose songs that were close to us or that we liked a lot. There are moments of emotion. There are moments in our history.

We were all born in the 40’s and 50’s. So the early part of rock and roll is part of that. And what happened after that, from The Beatles and The Stones to West Coast music, there was a tremendous and fantastic amount of brilliant songs that came out. And they happen to you. Once you hear something like that, they get stuck in you – they are in your bloodstream.

Things like [Little Featâ€™s] “Dixie Chicken”. And “Rockin ‘Pneumonia”. All those love songs. I used to play love songs before I joined Purple. Very in love. And there’s a skiff song here. I know in America it was from someone else, but I had heard it from Lonnie Donegan – “The Battle of New Orleans”. Which might be an odd choice for a rock band, but it’s fun. Why not?

You’ve said this funny word a few times already. This album just looks fun. When I hear you start jamming on something like Ray Charles, it’s just fun. Was Turning to crime as fun to make as the finished product looks?

The thing is, when you’re working on a drum machine or click track, it’s very easy to get too precise. And the thing that I find really cool about this album – and Don especially – is very loose. It almost sounds like he’s doing a warm-up song – but it’s the finished song. It’s not perfect. But that’s what makes him soâ€¦ happy I guess. It’s a fun word to use, happy.

Well, as far as I know, the last concert of Deep Purple was on March 14, 2020 in Mexico. You have upcoming dates finally in February through most of 2022. Are you excited to get back on stage?

RG: Yeah, I’m going to wear a piece of wood around my neck and ask myself what’s the point, you know?

Making the cover album really made us play a little more. I’m not the type to practice. Practicing bass on my own is not very fun. We’re the kind of group where if you give us a day to warm up, we’ll be fine.

We hope there will be a lot of touring next year. The tours of the last two years have been rebooked. So we’ll be in Europe this summer to do festivals and all that. From May or June to the end of the year, we are quite busy. Which is good. Keep your fingers crossed.