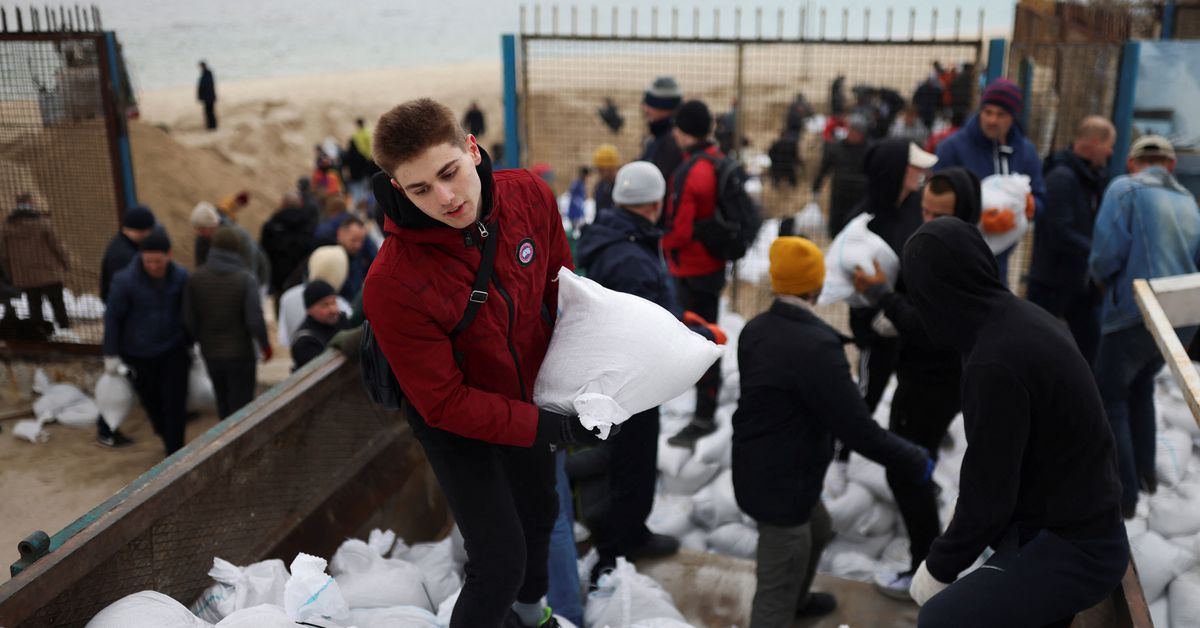 ODESSA, Ukraine, March 14 (Reuters) – Residents of Odessa formed a human chain on Monday to haul heavy bags of sand from the beach onto waiting trucks as the Ukrainian port city frantically built defenses against the advance Russian troops.

Shortly after the February 24 invasion of Ukraine began, civilians from all walks of life filled sandbags, tied them up and carried them around the city where they were used as barriers and to protect the monuments.

“We work here because we don’t know how to kill,” said event photographer Victor Skrypnik.

Dozens of people gathered behind him and a backhoe piled up mounds of sand. From time to time, the workers burst into patriotic songs.

“We are not professional warriors, but we can help our army and 60% of victory is built here by (ordinary) people,” Skrypnik said.

Ukrainian President Volodymyr Zelenskiy called on citizens to join the war effort in any way possible.

Tens of thousands of people have answered his call as the Russian army advances in the south and northeast and close to the outskirts of the capital Kiev.

Moscow says it is carrying out a “special operation” to demilitarize and “denazify” Ukraine. Ukraine and its Western allies call this a baseless pretext for a war of conquest.

Russian troops have yet to reach Odessa, but Britain’s Ministry of Defense said on Sunday that Russian naval forces had formed a blockade on Ukraine’s Black Sea coast. Many in Odessa think it’s only a matter of time before the fighting gets to them.

The inhabitants are particularly proud of their city. Odessa, with its historic buildings and wide boulevards, was a favorite vacation destination for residents of the entire Soviet Union.

It’s also where a 1905 uprising, backed by mutinous Russian sailors, was violently crushed by Tsarist forces – scenes director Sergei Eisenstein depicted on Odessa’s giant staircase in his film from 1925 “The battleship Potemkin”.

On the beach, organizers said they had moved around 400,000 sandbags in Odessa so far and some 700 tonnes of sand were being bagged every day.

“We are very optimistic here about the situation, because people are very united,” said comedian Ivan Dyubo.

“While NATO is pretty quiet, we are actually fighting,” he added, echoing growing Ukrainian frustration that the West is not doing more to help push back Russia’s advance. .