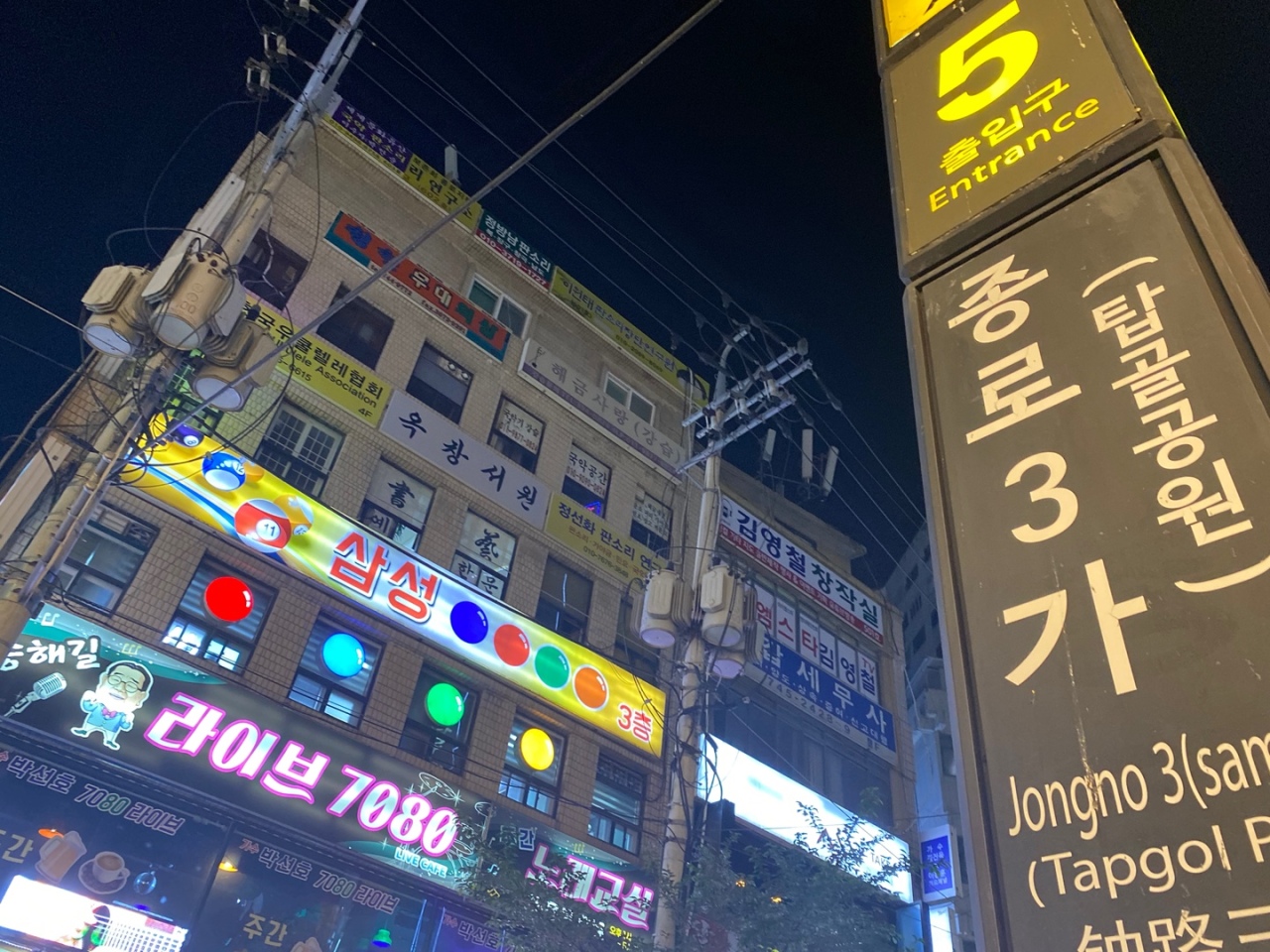 The following is part of Seoul Subway Stories — a new series from the Korea Herald that explores subway stations and their surroundings across the city. – Ed.

Jongno 3-ga has 16 exits with three subway lines passing through the station.

The sheer number speaks volumes about the importance of Jongno-gu, which is central to the lives of Seoul residents. Meaning Bell Street, with the bell in the name referring to Bosingak which stands at the intersection of Jonggak, Jongno is one of the busiest areas of the South Korean capital alongside Gangnam and Hongdae.

Many of the city’s tourist attractions are located here. There is Insa-dong, a bustling street filled with traditional cafes and shops. Gyeongbokgung Palace, the main royal palace of the Joseon Dynasty built in 1395, and Jongmyo Shrine – a UNESCO World Cultural Heritage Site and the oldest preserved Confucian royal shrine – the list goes on.

“Since the founding of the Joseon Dynasty and the transfer of the capital to Seoul, which was previously known as Hanyang, Jongno-gu has played an important role as the central part of the city in terms of politics, economy and culture for almost 600 years until this day,” said a representative of the Jongno Foundation for Arts and Culture.

“Major public institutions are located in Jongno, which has the highest administrative rank among offices representing 25 city wards.”

The neighborhood has many faces. For starters, it has the most future heritage sites in Seoul – designated historic sites and items to be preserved for future generations to enjoy, the official said.

When you come out of Exit #1 and walk straight towards Bosingak where the annual New Year’s Eve ringing ceremony is held each year, you will soon see skyscrapers including the Jongno Tower, a 33 floors with a raised ring. in the form of a top floor.

But behind the main streets filled with modern buildings are decades-old rice cake shops and narrow lanes laden with hanoks – traditional Korean houses – renovated into cafes and clothing stores, underlying the charming mix of old and new of the city.

Ikseon-dong, located outside Exit No. 5 of Jongno 3-ga Station, has become one of the city’s hottest neighborhoods for young people.

Ikseondong Hanok Village is always full of young couples and tourists sometimes dressed in modern-style hanboks in hopes of snapping the perfect Instagram photo. The nearly 800-meter-long alley has no shortage of shops, cafes and restaurants with international origins but all in traditional Korean houses. At night, the street lights up, creating a cozy atmosphere.

In 2018, the area was removed from the “redevelopment zone” by the Seoul Metropolitan Government, a move to maintain hanoks and impose height restrictions for buildings.

Near the arcade is Songhae-gil, a street dedicated to famous artist and TV host Song Hae. The 95-year-old celebrity has held the “National Singing Competition” for 34 years since 1988.

Nakwon-dong is where Song has been based during his more than 50-year career, according to the committee behind the street.

Tapgol Park also reopened earlier this year after being closed for nearly two years due to the pandemic. The small public park has been a crucial part of life for many seniors and homeless people.

Outside the park, you can often see older men getting together and playing janggi – a Korean style of chess.

Hidden behind the main streets of Nakwon-dong and Ikseon-dong are dozens of bars catering to LGBT customers scattered around the neighborhood.

Although things are not as open as in other LGBT neighborhoods around the world, gay couples holding hands or commercial establishments with rainbow flags are not uncommon here.

“Friends is a quiet atmosphere bar serving cocktails and wine, catering primarily to gay men but also various sexual minorities and their allies,” he said.

As Ikseon-dong has emerged in recent years as a dating hotspot for heterosexual couples, concerns about gentrification have grown. Some members of the LGBT community also feel their space has been “invaded,” Chun said.

Following the lifting of COVID-19 social distancing rules, nightlife in Ikseon-dong appears to be returning, with street vendors and alfresco tables outside restaurants filled with drinks and chat. The same goes for gay bars.

“Although the pandemic is not over and we are not yet back to pre-pandemic levels, our business has seen a major recovery from when social distancing rules were in place,” said said Chun.