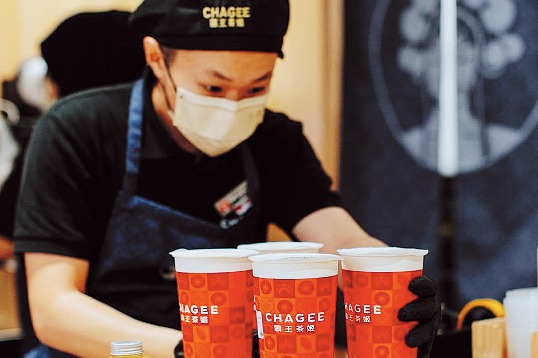 Many brands are rushing to win customers in the region

To cool off on hot summer days in Beijing, Noppawan Sereesuntiwong often went to a coconut milk tea shop near Dongdaqiao subway station in Chaoyang District.

The 41-year-old Thai is a die-hard fan of the sweet and cool drink, also known as bubble tea, which is popular among young people in her home country and many other Southeast Asian countries .

While studying in the Chinese capital, Sereesuntiwong, who now lives in the United States, tried many brands of Chinese milk tea before finding her favorite.

“The weather in Thailand is hot and people like sweet and cool drinks. We love colas, juices and bubble tea. In China, I liked Coco’s mango tea, which is cool and not too sweet,” she said.

Sereesuntiwong studied Chinese at Capital University of Economics and Business for two years from 2017, before continuing her education at Beijing Language and Culture University.

Milk tea shops have mushroomed not only in China but also in Malaysia, Singapore, Vietnam and Thailand, with Chinese brands experiencing a boom in the region.

Peng Xianggui, head of the company’s overseas business, said, “At each of our outlets in Malaysia, dozens of riders waited to make deliveries. We didn’t offer any discounts, but our 26 stores sold more than 30,000 cups of milk tea to take away. Local people can’t get enough of Chinese milk tea brands.”

In 2018, CHAGEE launched its “going global” plan, just a year after gaining a foothold in its home province of Yunnan. In October 2018, it set up an overseas business department, firmly focusing on the Southeast Asian market.

In August 2019, the brand opened its first overseas outlet in Kuala Lumpur, the Malaysian capital. With its elegant design concepts and milk tea flavors, the brand has grown rapidly and now has more than 30 stores in Malaysia.

Peng said, “Cold drinks are a staple in Southeast Asia. The annual average temperature in the region is close to 30°C and the demand for these beverages is huge throughout the year.

Many CHAGEE outlets in Malaysia are located in malls close to major brands such as Starbucks and McDonald’s. On July 22, CHAGEE opened its 37th Malaysian outlet, while last year the highest turnover of an outlet reached more than 38,000 yuan ($5,635).

CHAGEE is just one of the Chinese milk tea brands to gain popularity in Southeast Asia in recent years. In November 2018, a long line was formed when Heytea launched the sale of its product at the ION Orchard shopping complex in Singapore. Local media described the crowd that gathered as “incredible”.

Chatime, which mainly focuses on the international market, has opened 2,500 stores worldwide, many of them in Southeast Asia. Mixue Bingcheng Co, which has more than 10,000 outlets in China, has opened many stores in Vietnam’s capital Hanoi, unexpectedly triggering a Chinese tea boom. Nayuki, whose popular fresh fruit teas include drinks topped with cheese-flavored mousse, has adopted a “social marketing +” model, attracting a large number of Southeast Asian fans to her social media accounts.

The growing influence of Chinese tea culture is likely key to the success of the country’s milk tea brands.

Tea is mentioned in a poem written by Su Shi, a renowned poet and statesman of the Song Dynasty (960-1279), indicating that the drink has a long history.

Lines from the poem include: Wine-sleepy when the road is long,

I long for the bed; Parched throat when the sun is high,

“Through the ancient Silk Road, the drink was brought to India and also to Western countries. During the colonial era, milk tea was brought back to places like Taiwan and Hong Kong. The development of the milk tea is proof of the process of globalization of trade that originated from the Silk Road.”

Liang said many viewers have been drawn to the popular TV series Meng Hua Lu, which features dian cha, a Song Dynasty tea-making technique. During this dynasty, most teas existed in the form of semi-fermented tea cakes. The dian cha process involved first grinding the tea leaves into a powder, before finely sifting the powder and placing it in a tea cup.

“The cultural heritage exhibited by the tea culture is a bridge connecting the countries involved in the Belt and Road Initiative”. It shows that the historical cities along the Silk Road had two main functions: trade commercial and cultural,” Liang said.

With its growing demand for bubble tea, Southeast Asia shares close cultural ties with China through trade and people-to-people exchanges, making the region an initial destination for Chinese brands that venture abroad.

Peng from CHAGEE said, “We use fresh Chinese tea leaves and have our own organic tea farm in Lincang, Yunnan. Chinese tea culture is symbolic, attracting a growing number of locals, especially young people. The reasons for its success are the growth of China. economy and increased confidence in cultural communications.

CHAGEE uses many traditional household features in its stores, where customers can find items such as elegant Chinese teapots.

The company name is also linked to Chinese history. It takes its name from the ancient Chinese drama Ba Wang Bie Ji, also known as Farewell My Concubine.

Henry Chong, a Malaysian milk tea lover, said he liked the flavor of CHAGEE milk tea and its elegant packaging.

“Not many milk tea shops offer this type of product and experience. The brand really appeals to people who love Chinese history and Chinese tea,” Chong said.

Peng said CHAGEE has many fans between the ages of 18 and 35. They are excited about new trends, especially when they relate to Chinese culture.

Liang believes the popularity of milk tea in Southeast Asia also reflects the globalization of trade that began along the Silk Road.

The market is expanding

According to consulting services firm Fortune Business Insights, the global bubble tea market was $2.02 billion in 2019, and it is expected to reach $3.39 billion by the end of 2027, growing compound annual growth of 7.2% over the forecast period.

However, the COVID-19 pandemic has had a negative impact on the bubble tea market growth. Authorities have imposed strict lockdowns and closed restaurants, cafes, farms and factories. Bubble tea production has also been affected by import and export restrictions and a labor shortage.

Peng said, “COVID-19 has had a significant impact on the food and beverage industry. We have experienced labor shortages and had to temporarily close some outlets to comply with health regulations. Eating and shopping habits have changed significantly, with more people ordering food and drink online.As a result, we have decided to join the online market, where we have worked well with service companies. delivery. “

More and more bubble tea drinkers are now looking for better value for money, and young people in China see drinking the drink as a social activity, during which they sit and chat with friends in spacious outlets where drinks are sold.

Peng added, “Milk tea has slowly evolved from a thirst quencher to a social requirement. For example, people used to go to outlets such as Starbucks to chat with friends while drinking. coffee, but now milk tea shops offer another option.”

Leonard Lee, a marketing professor at the National University of Singapore who studies customer psychology, said consumption has symbolic value.

Drinking bubble tea is not only a satisfying experience, but also an expression of status, a sign of taste, and a willingness to embrace new things.

Local innovation is also key to the success of milk tea. For example, Heytea launched a promotion in Singapore to sell durian and salty yolk flavored ice cream in July and August every summer. These tropical flavors are well suited to local tastes.

Unlike sweet milk tea products, Chinese brands focus on the flavor of the drink, which has a lighter taste. The higher polyphenol content in tea also makes it more refreshing, with the drink becoming particularly popular among professionals in Southeast Asia.

Peng said, “Young people in the region are asking for healthier beverages and we are promoting the transition to healthy eating. For our products, we use fresh tea leaves and milk, sometimes accompanied by fresh fruit.

Countries in North America and Europe are also gradually increasing their consumption of modified tea products, according to a Fortune Business Insights report in 2020.

Additionally, the number of bubble tea shops has increased in the US and UK as consumers shift to non-alcoholic or low-alcohol beverages, including tea-flavored drinks, according to the report. .

CHAGEE announced plans to open more stores in Thailand and Singapore, as well as in Europe and North America.

Peng said, “Starbucks brought coffee culture to the world. We come from Yunnan, the birthplace of the ancient Tea and Horse Road (a trade route mainly connecting today’s Shaanxi, Gansu, Sichuan and Yunnan provinces and the Tibet Autonomous Region). We want to bring our tea culture to more places and shine it on the world stage.”

Sereesuntiwong from Thailand said he once found a Coco milk tea outlet in the United States, but missed the chance to get a drink.

“Next time I see the store I will definitely go. I really miss Coco’s mango bubble tea,” she added.