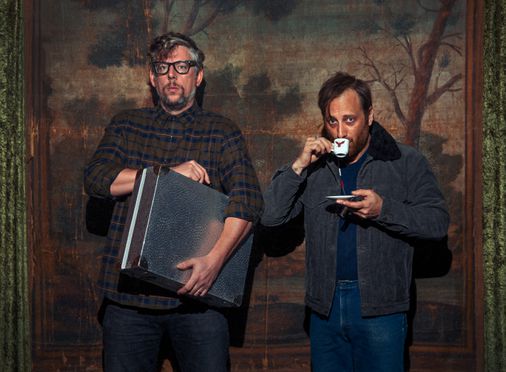 The Black Keys are here to ‘Boogie’

Singer-guitarist Auerbach and drummer-producer Carney devoted themselves to music full-time after both dropping out of the University of Akron. Penniless, they took a gig that meant driving from Akron to Seattle for next to nothing.

Get the Big Task

Your guide to staying entertained, from live shows and outdoor entertainment to what’s new in museums, movies, TV, books, restaurants and more.

“When you have nothing, getting paid $10 seems like a lot,” Auerbach said in a recent phone interview from his current home in Nashville. “We would have driven anywhere to play a show. We didn’t really have any long term plans or goals. We just went from year to year, making records and playing shows. And luckily, each year has gotten a little better than the last.

“We were just going there for that. We were heading into the great unknown, driving for hours from state to state. We have been through so much together. The older I get, the more I appreciate the relationship I have with Pat, because it’s so special.

Their latest album is aptly titled “Dropout Boogie”. It spawned a No. 1 alt-rock hit, “High Life,” and will help the Keys on their first tour in three years, which takes place at the Xfinity Center in Mansfield on July 29. Here’s more of what Auerbach had to say on a range of topics, including the best live artist he’s ever seen, a bridge between blues and rock, and Carney ties on Captain Beefheart.

Q I love the idea that “Dropout Boogie”, the title of your new record, was actually also the title of a song on a Captain Beefheart record, “Safe as Milk”, in 1967. I read that you and Pat played his records hundreds of times and you were fanatics. What made you so excited about Beefheart?

A. I love everything about his “Safe as Milk” album. We have listened to this so much. There’s Ry Cooder everywhere playing open chord slide guitar, and I really got into that stuff because I was obsessed with blues music. And at the same time it was weird, weird rock ‘n’ roll. And Pat loved it because it was weird and weird and it was rock ‘n’ roll. It was something that bound us both.

Q You were like a two-man SWAT team to keep the blues alive. Blues isn’t always an easy genre commercially, but you floated above the fray.

A. I think it’s partly because we kind of stayed away from the blues world. We never played blues festivals. We’ve always seen ourselves as a rock ‘n’ roll band. And I think that has a lot to do with being so influenced by [Mississippi label] Fat Possum Records and going to see people like RL Burnside and T Model Ford and all those guys. When they went on tour, they didn’t put them in blues clubs, they put them in rock ‘n’ roll clubs. It’s just a different aesthetic, and I think that helped fill the void in my mind. I mean, I saw RL Burnside in the same place I saw Link Wray. You know what I mean? And everything was connected for me.

Q How did you get on the Fat Possum list – people like Burnside and Junior Kimbrough and Mississippi Fred McDowell? You did some of their songs on the cover album of [Mississippi] hill country blues that you released last year as “Delta Kream”. I love that one.

A. My dad had a nice record collection. He used to play blues records all the time mixed in with everything else. He was playing the Son House collection and the complete Robert Johnson recordings – it was all the time. So even before playing the guitar, I knew all these songs by heart. But then I started looking. By playing the guitar, I started to forge my own tastes and I was looking for what was rawer. It kind of led me down this path where I was finding weird and obscure records. And suddenly a label [Fat Possum] of Oxford, Miss., is starting to release albums, and it wasn’t like something from decades past with a deceased bluesman. All of a sudden I could walk into a bar and see this guy in person and talk to him. It was life changing to watch RL Burnside play. We followed him a bit. These are the best shows I have ever seen in my life.

Q Do you do much of the “Delta Kream” material live on tour now? How do you decide what to play? You have a lot of material at this point.

A. Yes, we have many catalog for you to choose. We will try to play a little of all that. But for this tour we will bring [Fat Possum session players] Kenny Brown and Eric Deaton with us, and we’re going to do a “Delta Kream” mini set, which will be really fun. It’s a pure joy to play with these guys.

Q You have your own label now [Easy Eye Sound, which has released records by Yola, the Velveteers, Ceramic Animal, Robert Finley, and others]. How does this fit in with what you do?

A. My whole label is based on things I love and people I want to work with. I never think about making money. I just think, “Can I make a good record with this person?” This has been my main goal. And being in the Black Keys gave me the luxury of doing that. So I take full advantage of it. And I’m still looking. The search continues.

The interview has been edited and condensed. Steve Morse can be reached at [email protected].

And the guitarist and drummer from the Pantera “Reunion” tour are…

SpaceX has launched its 25th cargo mission to the International Space Station. Here’s what’s on board.