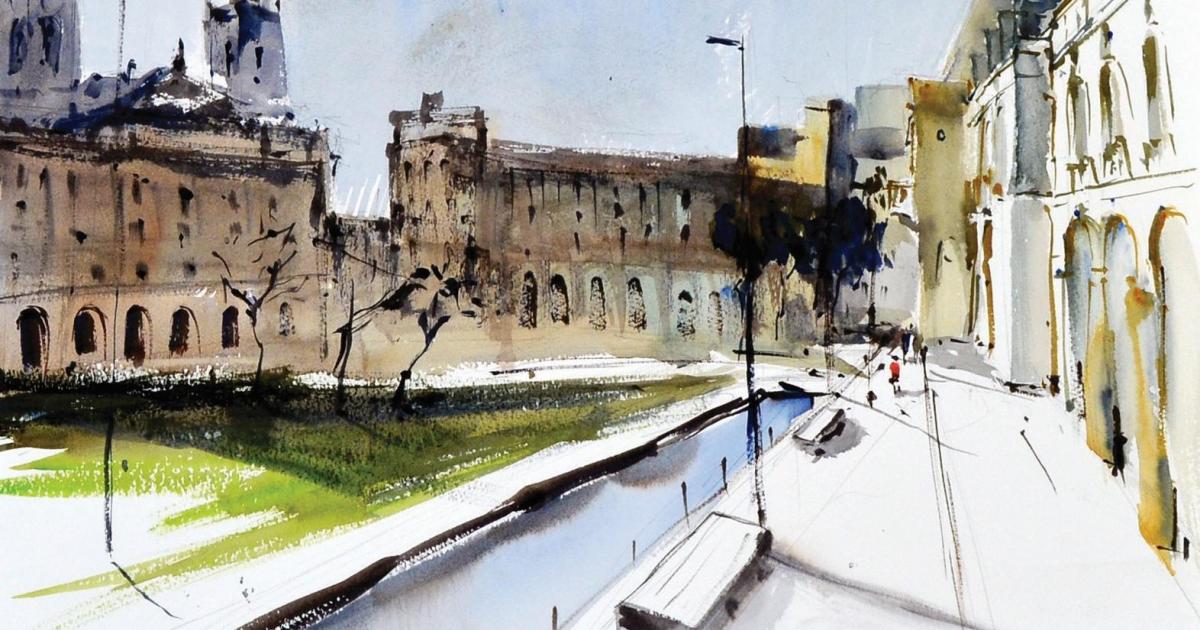 The Silent Call of the Grand Harbor

Hosted, as an exhibition title, could subliminally steer the viewer towards different interpretations. SARAH CALLEJA talk to Joseph Agius about his current exhibition at Mqabba Il-Kamra ta’ Fuq.

JA: The term “port” can be used both as a verb and as a noun. The title of your exhibition Hosted, in the past tense, works on several levels. The title evokes a feeling of security, protection, confinement. However, the verb can be used in another context – that of ruminating, keeping within, retaining and nurturing. At first sight, your choice refers to the first definition. In the exhibit’s mission statement, it says, “Sarah Calleja’s grandmother’s stories of World War II and Santa Maria’s most anticipated convoy are her first nostalgic memory of Grand Port.” Does “staying” and ruminating on these anecdotes also count in the choice of the title?

CS: The subject of the exhibition, which is that of works inspired by scenes on the shores of the Grand Port, was chosen before the name. I paint outdoors and for some reason kept coming back to this area. I knew the works had to be varied, showing both the industrial and the urban but, above all, I wanted to evoke this particular feeling of place that I cannot put into words. I did some research to find if there was a defining word used historically that seemed appropriate as a title; however, it was when curator Melanie Erixon sent me a list of possible titles that I knew I had found the title of the exhibition.

I like this Hosted has a double meaning, and it seemed to me to take on the meaning of evoking feelings in a place, without pronouncing the words themselves; indeed, a collection of works on the Grand Port. The collection is entirely devoted to the Grand Harbour.

I would like to point out that the works vary in size. The greatest works are paper stretched on stretchers. There are also a variety of mediums and although the main body of work is in watercolour, I have also worked in oil and pigment on paper.

JA: Usually, Sarah Calleja is synonymous with outdoor paintings of the wide open spaces of our island. The art-loving public has become accustomed to your skilful handling of the watercolor medium with works that sometimes border on the abstract. Sometimes you team up with colleagues and go on a painting expedition. This collection of paintings perhaps shows another side of you – a security in harboring solitude, introspection, away from the crowds. Is that the case ?

CS: Well this is an exhibition of works that have been done over the past three years and as we all know COVID hit and our outdoor band came to an end like a lot of other things . I still venture to paint early on Saturday mornings, sometimes in the company of one or two other artists; however, over the past few months I have deliberately visited sites in search of composition, subject matter and themes for the exhibition, sometimes beginning a sketch on location which I would later develop in my studio.

JA: The palette, sometimes monochromatic and dramatic, sometimes chromatically restrained, adds to the timelessness of the pieces. You focus on the body of water in the harbor itself, the architecture, the boats – what essentially defines a harbor. Are you documenting a “now” like the aftermath of a very colorful and, at times, violent story? Is it a settling of the waters in a region that has been the backdrop for many historical episodes too numerous to mention? Is this what essentially remains, in spite of everything?

CS: As an artist, I move away from creating a photo or a postcard. Maybe that’s why I explored a monochromatic expression for several years. I am drawn to tonalism, or monochromatic. Water is present in each painting because it is the Grand Port that brings these paintings together, but it is not always the main subject.

I think this exhibition is a documentation of now. There is no reference to the romantic scene composition of 19th century paintings to which we are accustomed: the Grand Port with galleys and luzzus along the shore. We don’t need to show activity in the port anymore, it’s just a click away, after all.

My main goal is to create a mood through my painting, eliminating the painterly unnecessary and ensuring that each piece works through its composition and color. Although the backdrop remains the same, some works draw viewers’ attention to sometimes unnoticed details in the Grand Harbour.

JA: Quoting from the exhibition’s mission statement, “The chemical composition of the pigment allows certain colors to move more quickly in water, sometimes separating into their constituent colors”. The medium mimics the flowing qualities of the theme, flowing too like a moving outpouring of emotions and memories. Maurice Sendak, the late author and illustrator of children’s books, once referred to the watercolor medium as: “It’s my way of stimulating my imagination to see what I find hidden in my head.” Does this transient medium work the same way in your case, leading you to a subconscious outpouring?

CS: I think the above is true when researching a new idiom or drawing for a new painting. I do a lot of experimentation in small formats and sometimes they lead to a painting. In Harboured, I show five of the bozzetti that were made; the sketches were later developed into large-scale works which are also on display.

While the flowing qualities of watercolors can lead to a few happy accidents, I think most work is created when I am confident and in full control of the medium. Although the work looks loose, the markings are completely intentional. In watercolor, the most important color is the white of the paper, and once covered, it will never reflect light the same way again. As for the finished works, I work with large brushes and water jets of different sizes, but I guide the paint to do what I want it to do. Sometimes he obeys.

JA: There are many artists who have depicted the Grand Harbor and its surroundings in the past. We can cite JMW Turner and Carlo Carrà among the great names in the history of world art. The Schranz and Gianni, LM Galea and Vincenzo d’Esposito families of artists in the 19th and early 20th century fairly realistically depicted port activities amid commercial activity, the Royal Navy, ship repairs in the shipyard. Although the port is today the scene of cruise ships and the ships are still repaired in the docks, you seem to me, unlike your predecessors, to have concentrated on details, on excerpts, rather than on a view overall. The loneliness of these works is accentuated by the absence of humanity. Does focusing on the shards add to the poetry of the pieces? Is the overview unpleasant?

I started painting around 6am so the surroundings are usually quiet thanks to that. But I appreciate the solitude; it’s the weekly time when I’m alone with my thoughts working on something I really enjoy. My phone is usually on silent or in the car, and there are no children around.

There are only people in two of the paintings. One of those, Il-Moll tal-Faħam 2, features people on a boat they were temporarily occupying at that time. The other, Pier 1 in Bormlashows people who are almost always present in this area, and therefore they had to be included.

In no way do I feel that the overview is unpleasant; frankly, I could easily paint works for another exhibition on the same theme. Everywhere I look I see a new painting. In the painting Grand Harbour, he depicts the general view from the bastions of Sainte-Barbe. There is a distance that separates me from the subject itself; it occurred to me that this was the best composition for this particular painting. I however painted in the same spot and zoomed in on Fort St Angelo. It’s a matter of aesthetics.

I spend a lot of time developing the composition of the painting. I had started this collection by placing pins equidistant from each other on the shores of the Grand Harbour, ensuring that I represented the entire harbour, with the aim of bringing the cheapest and least expensive parts to life. popular in the Grand Harbour.

Hosted, hosted by Mqabba’s Il-Kamra ta’ Fuq and curated by Melanie Erixon for Art Sweven, is in place until August 15. Check the event’s Facebook page for opening hours.

Independent journalism costs money. Support Times of Malta for the price of a coffee.