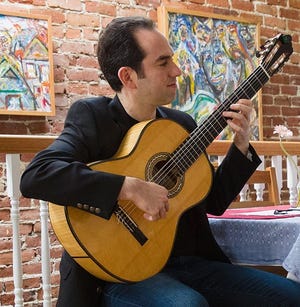 The University of RI guitarist won Billboard’s second No. 1 hit in 10 weeks

A veteran of many albums, University of Rhode Island classical guitarist Adam Levin had never seen any of his recordings reach the Billboard charts. Now, in the span of 10 weeks, he’s done it twice – clinching # 1 with two different albums.

In June, “Music of the Promised Land”, his debut album with mandolin and guitar chamber group Duo Mantar reached No. 1 on Billboard’s Traditional Classical Albums chart. This time it’s his solo job, “Spanish Guitar of the 21st Century, Vol. 4, “ who topped the charts the week of September 4 – sharing a space on a list with big names including composer John Williams, violinist Hilary Hahn, cellist Yo-Yo Ma and pianist Natalie Zhu.

“I’m definitely in good company,” said Levin, URI classical guitar teacher. “It is humbling to know that I am surrounded by such powerful superstars, many of whom have influenced a generation or more of young musicians.”

“Spanish Guitar of the 21st Century, Vol. 4, ”released August 20 by Frameworks Records, is the culmination of 15 years of research, with Levin courting composers to write for guitar, commission and record a repertoire that spans four generations of new Spanish composers. The four volumes include more than 30 commissioned works, almost all of which have never been recorded before.

“This really answers the critical question: what comes next in the long line of Spanish composition? Said Levine. “We have a source of original compositions and transcriptions by Joaquín Rodrigo, Manuel de Falla, Isaac Albéniz, Enrique Granados, Joaquín Turina, among others – pillars of Spanish composition that established the classic Spanish sound of the 20th century.

“I grew up studying this music, playing it when I was young, and then in my mid-twenties I wondered what the future of classical Spanish music was.”

Levin, a protégé of virtuoso Eliot Fisk at the New England Conservatory, began seeking an answer as a Fulbright scholar in Madrid, Spain, in 2008, offering to study and perform written Spanish music of the 20th and 21st centuries. . He quickly realized he had landed on a “new Spanish songwriting renaissance,” he said. The last four generations of Spanish composers created music as unique and vital as their legendary ancestors.

“Music had an unmistakable Spanish DNA, but composers no longer sought only the quintessential Spanish sound, but the cross-pollination with music of other cultures, genres and centuries of themes, forms and styles of composition,” said he declared.

Apart from Gabriel Estarellas – Levin’s Fulbright mentor and guitar teacher at the Real Conservatorio Superior de Música in Madrid – no one defended this music. So Levin took charge of the mission himself.

Since 2008 he has commissioned nearly 40 new chamber and solo pieces from four generations of Spanish composers, all of which have appeared in the “Spanish Guitar of the 21st Century” series or on other recordings.

The final volume in the series – a double CD recorded at a converted Masonic temple in Roslindale, Massachusetts, with engineer John Weston, and in Badajoz, Spain, with engineer Luis del Toro – includes pieces by master composer Leonardo Balada , born in 1933; his disciple Jorge Muñiz, born more than 40 years later; and composers in the intervening years. All 11 titles go avant-garde in the style of José Luis Turina “Arboretum,” with the flavor of American bluegrass from the Muñiz trio “Portraits of the heart of the country”, in the Sephardic tradition of Broton “Sonata Sefardita. “

Among the highlights is the first recording by Cuban-Spanish composer Eduardo Morales-Caso “Concierto de La Herradura”, in which Levin is supported by the Orchestra of Extremadura under the direction of Álvaro Albiach.

In addition to being a touring artist, music advocate, and teacher at URI and the University of Massachusetts Boston, Levin is a co-founder of the Kithara Project (kitharaproject.org), whose mission is to improve the lives of children and young people through the classical guitar.

Through his 12 albums, his goal has been to expand the classical repertoire for future guitarists.

“This project is futile if I cannot make the connection with the next generation of guitarists,” he said. “For my students, I aim to bridge the gap between the sounds and traditions of old world Spanish music and the trends in Spanish composition today.”