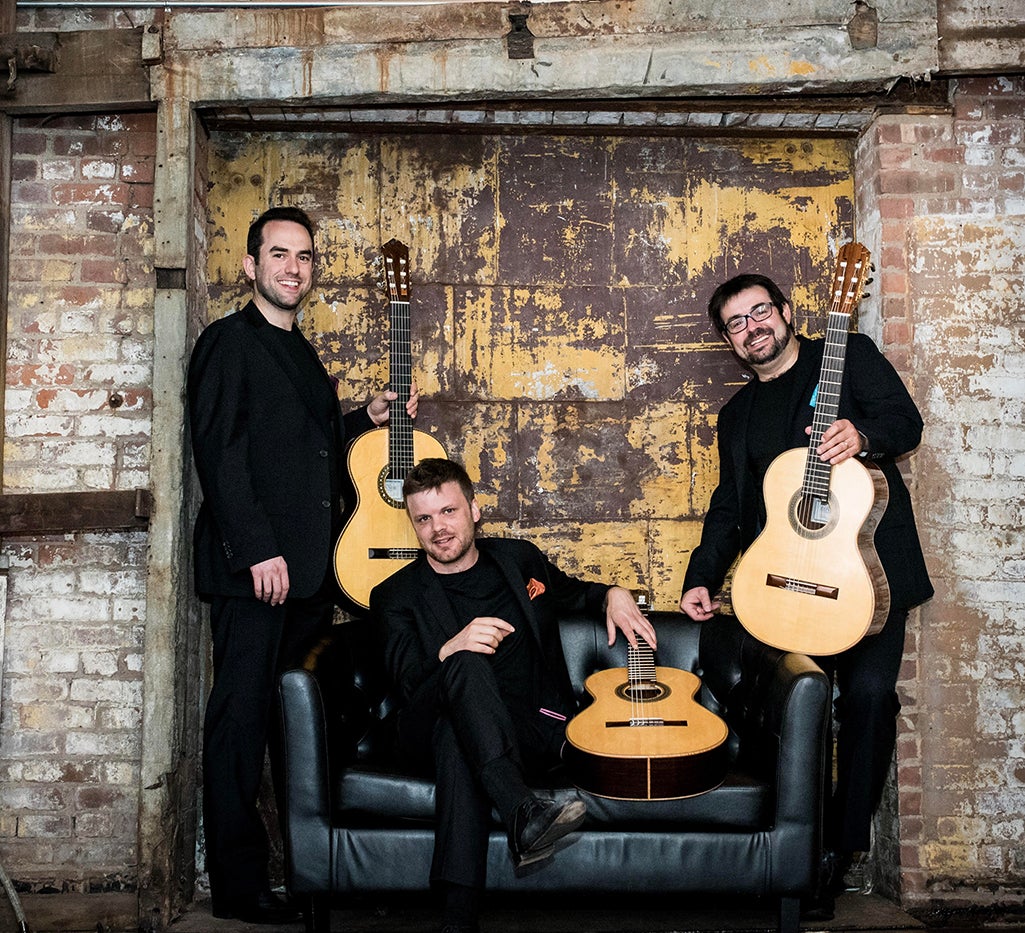 KINGSTON, RI – June 27, 2022 – When internationally acclaimed classical guitarists Adam Levin, Scott Borg and Matt Rohde came together seven years ago to form The Great Necks trio, their goals were both simple and ambitious.

“We came together to make great music together,” says Levin, a professor of classical guitar at the University of Rhode Island, “and do what has never been done before.”

“There are a lot of classical guitar ensembles that kind of stay in the ways of traditional and safe,” adds Rohde. “We were interested in making good music, as Adam said, and having a good time together, but we also really wanted to push the boundaries of the instrument and introduce a repertoire that maybe another ensemble n wouldn’t even dare.”

With the release of “Impressions of Spain”, the trio have now achieved these goals with their first two albums. And more. Not only is the music empowering, critically acclaimed, and expanding the repertoire for three guitars, it sells.

The week following its May 20 release, “Impressions from Spain(Navona Records) debuted at No. 2 on the Billboard Traditional Classical Weekly Chart, one place below cellist Yo-Yo Ma and one above legendary composer John Williams. Their debut album, “Original Arrangements for Three Guitars” (Frameworks), reached number 10 on the Billboard chart in 2018.

“It’s very empowering and, frankly, exciting to see our ensemble on this list, especially when it’s next to someone like Yo-Yo Ma,” says Rohde. “It’s a band that we all really, really believe in, and we’re doing something that nobody else in the guitar world is doing. Seeing people react positively to this is really rewarding.

“Growing up as a kid, you never really imagine yourself being on those cards,” adds Borg. “It’s a pretty phenomenal feeling.”

“Spanish music is so deeply at the heart of classical guitar, but often the same repertoire seems to bubble up in concerts and recordings,” Rohde explains. “It’s a very fresh take on Spanish music that a lot of people don’t know. And it still taps into the very important soul part of the guitar.

The tracks on the album cover almost three quarters of a century, from Albeniz’s “The Magic Opal” to Falla’s “4 Piezas Españolas”. The recorded collection provides a representative sample of each composer’s Spanish sound during this period, Levin says.

“That identifiable Spanish sound was actively cultivated among the composers on the album, and hearing how each composer brought their own flair to this music was both educational and inspiring,” he says.

“The music is very accessible,” adds Borg. “It’s definitely enjoyable and fun to play. There are so many different levels of complexity. Each time we play it, we hear something different and try to create an even more nuanced interpretation. It’s one of those albums you can listen to over and over again. Every time you listen you get something else from the album.

Levin, Rohde and Borg, who met during their school days – Levin and Borg at the New England Conservatory and Borg and Rohde at Yale University – formed The big necks almost afterwards.

In 2015, they launched the Kithara Project, a non-profit organization that aims to improve the lives and opportunities of young people through the classical guitar. Today, over 120 students participate in free, comprehensive guitar programs in three low-income areas –

The trio had so much fun establishing the nonprofit together that they decided to take the relationship on the road, starting with the Kithara Project Trio, which morphed into The Great Necks (named after neck of the guitar, not Great Neck, New York).

All are solo artists, recording artists and educators, with many overlapping projects, including regular appearances at festivals and concerts on several continents. Rohde, who lives in Mexico City, also composed and recorded music for an HBO documentary; Borg, who lives in Washington, DC, has conducted guitar orchestras in Baltimore and Boston; and Levin, who lives in Boston, has appeared on the Billboard charts twice with solo and duo projects and is the artistic director and founder of the URI Guitar Festival.

From their corners of the globe, the trio come together as The Great Necks to record and perform. “Impressions of Spain” was produced at the Futura Productions recording studio in the Roslindale section of Boston with engineer John Weston. Borg, Levin and Rohde started rehearsals five days prior, all showing up ready to brainstorm in time-consuming sessions.

“Because we live in three different places, we rely heavily on preparing our parts before rehearsing,” says Borg, who plays eight-string guitar in the trio. “One of the benefits of playing together is that we share the same understanding and sensibility when it comes to music and performance.”

“So many new and fresh ideas come together when we’re in rehearsal and later, spontaneously, on stage,” adds Levin. “We constantly push ourselves to be more accomplished musicians and better listeners.”

Along with touring with their new album, Borg, Levin and Rohde began commissioning half a dozen new works for three guitars for their next album. Famous Cuban-Spanish composer Eduardo Morales-Caso and French composer and guitarist Mathias Duplessy have already signed on to the project.

For more information on the trio, please visit: www.thegreatnecks.com