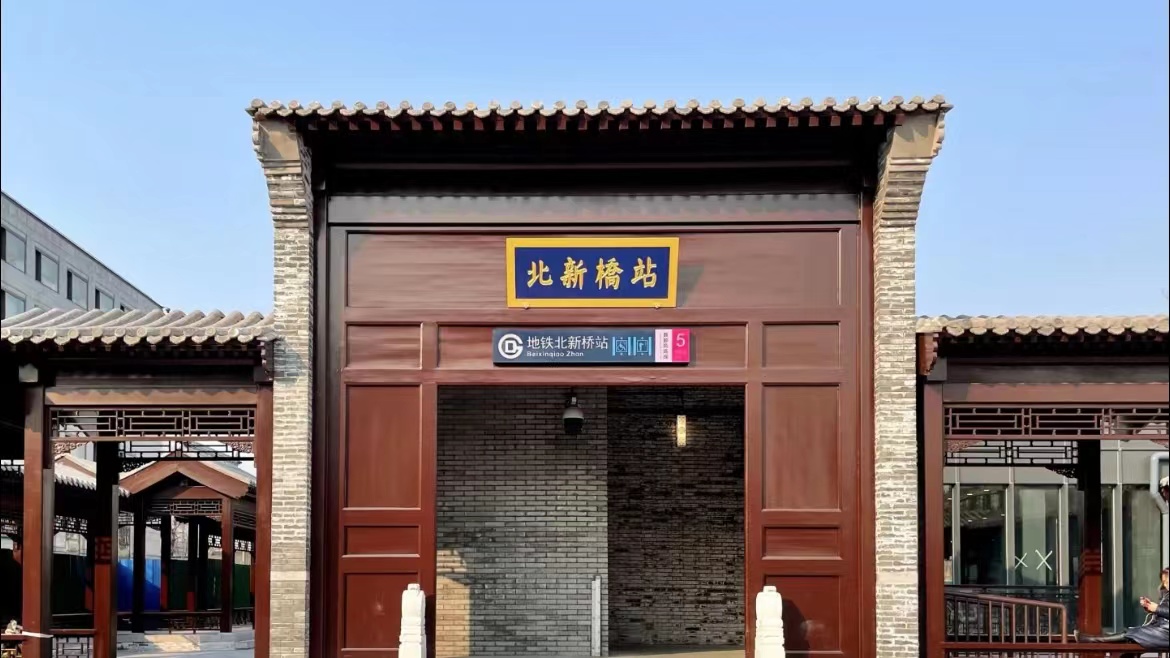 Who needs Dirty Box HBO or your local RPG group to find Beijing fantasy stuff. Warriors, princesses, doomed poets, dragons and dungeons are as close as a subway ride from Dongcheng.

Our walk starts at Beixinqiao Zhan. Yes, this is the new official “foreign language” name of 北新桥站. Why? I do not know. If you can read Chinese, spelling “ZHAN” in pinyin seems pointless, while people who can’t read Chinese won’t intuitively know that 站 means “station”, even if they have a pronunciation cradle.

Nevertheless, the subway station, formerly known as Beixinqiao Station, received a major upgrade this year as the terminal for the Airport Express. Now, travelers arriving in PEK with a strong craving for spicy crayfish can skip the taxi line and take a direct train to Guijie.

But there’s more to the neighborhood than copycat restaurants and linguistic microaggressions. There’s also a dragon biding its time in a deep well somewhere below the streets. There are several versions of this legend, but the most common is that when the Ming dynasty wished to rebuild their capital on the site of present-day Beijing, there was a dragon already in residence in the area who challenged this new arrangement.

But the dragon didn’t threaten to raze the city, because Chinese dragons don’t breathe fire. Instead, he threatened to use his wind and waterbending to perpetually flood the new capital. Hearing this, the emperor sent Liu Ji, one of his senior officials and city planners, to try to stop the dragon’s plan.

Liu Ji traced the source of the Dragon Flood to an “Eye of the Sea”, one of the many mystical wells that dot the landscape. Liu Ji – calling some favors with a few deities and some legendary heroes – convinced the dragon to descend into the Eye of the Sea and stay there.

In China, you don’t kill a dragon. We organize a meeting and we engage in a frank exchange of views. To preserve the dragon’s peace and quiet, Liu Ji proposed to build a bridge over the portal, and the dragon agreed to stay there until the bridge became old and unusable.

Liu Ji, an early adopter of linguistic microaggression in place names, dubbed the bridge the “New Northern Bridge”, tricking the dragon into thinking that no matter how long the bridge over his home /jail was still “new”. Hence Bei Xin Qiao. There is a replica of the bridge in the small park just west of Beixinqiao Zhan, exit D.

From Beixinqiao, head south along Dongsi Beidajie for about 400 meters. On the west side of the street is the entrance to Xiguan Hutong, once the home of writer Tian Han (1898-1968). Tian Han was an influential playwright notable for incorporating elements of the international stage, including spoken word dramas and plays, which rivaled traditional opera for the attention of theatergoers in era China. republican.

He later wrote the lyrics to a catchy little song that became popular after it was featured in the 1934 patriotic film. Children of troubled times. This song, March of the Volunteers, would eventually achieve even greater fame as the national anthem of the People’s Republic of China. (Didn’t help Tian Han much in the end. I don’t want to hurt anyone’s feelings, but let’s just say that the late 1960s wasn’t a particularly good time to be an older artist or intellectual in Beijing, even though you were “the guy who wrote the national anthem”.)

At the western end of Xiguan Hutong is a small (sanitized) memorial to Tian Han. If you enter the hutong about 140 meters away, you can see where the author lived until 1966. The courtyard has one of the last original hutong doors and is worth seeing.

Return to Dongsi Beidajie and continue south. The next major intersection is with Zhang Zizhong Road. There aren’t many streets (or subway stops) in Beijing named after modern historical figures and fewer still named after Kuomintang officers, but General Zhang was a Sino-Chinese war hero. Japanese and was killed in action against the Imperial Japanese. Army at the Battle of Yichang in 1940.

The large Western-style complex on the northwest corner of the intersection is the former headquarters of warlord and politician Duan Qirui (1865-1936). Duan was the commander of the Beiyang Army, one of the main military forces in northern China in the years after the end of the Qing dynasty.

With his troops behind him, Duan was one of the actors in a decade of struggle for territory and power in the vacuum left by the end of the Qing regime and the implosion of the Republican government following the death of Duan’s mentor. , the president-dictator. – the budding monarch Yuan Shikai. When Duan finally took power as “Chief Executive” of the Republic in 1924, this complex served as his residence and seat of government.

While the complex is officially closed to visitors (most buildings are managed by Renmin University), in the evening, Arch Cocktail Bar serves high class libations in a secluded corner of the complex. It is worth looking for.

In front of the gate is a memorial to the victims of the March 18 massacre. On this date in 1926, students demonstrating against the government of Duan Qirui were shot dead by soldiers at this place.

Walk east along Zhang Zizhonglu. Just past the Duan Qirui Buildings is a sign indicating the former residence of Ouyang Yuqian (1889-1962). Ouyang Yuqian was an important playwright who, along with Tian Han, helped popularize spoken-word dramas. Ouyang Yuqian served as the first president of the Central Academy of Drama, located near Nanlguoguxiang, from 1950 until his death in 1962.

His house is a fascinating blend of Western and Chinese style set in a courtyard in Beijing. Unfortunately, many people stuck their heads in the yard to take pictures of Ouyang Yuqian’s house, and current residents posted signs discouraging future visitors.

The eldest princess was the favorite of her father, the Qianlong Emperor. While he was perfectly fine with marrying her off to a Mongol prince to help cement a political alliance, he was less cool with her move to the steppe, and the happy couple lived here instead.

The closed red gate at No. 23 Zhangzizhong Road leads to another famous former residence. In the 1920s, it was the home of Koo Vi Kyuin (顧維鈞 Gu Weijun) better known in the West as Wellington Koo (1888-1985). Koo had a long career as a diplomat, representing China at the 1919 Paris Peace Conference and serving as ambassador to the United States and the United Kingdom.

He also participated in the founding of the League of Nations and served on the International Court of Justice in The Hague. In 1925, Koo was nursing his very ill friend, Sun Yat-sen.

The revolutionary leader had traveled to Beijing to negotiate with Duan Qirui and the other warlords, even though Sun was in the advanced stages of cancer. After doctors informed Sun there was nothing more they could do, Sun returned to Koo’s home, where he died on March 12, 1925.

Finally, walk to the next intersection (Jiaodaokou Nandajie) and turn left. Head north about 200 meters to Fuxue Hutong on the west side of the street. Enter Fuxue hutong and walk about 150 meters until you see the important traditional compound on the north side of the road. This is the former academy of Shuntian Prefecture (one of the historical administrative divisions of the city).

The academy was where the sons of the elite received instruction and study advice on how to pass the gauntlet of exams that separated them from a successful career. Part of the academy is now a primary school where the children of Peking receive instruction and study advice on., etc., etc. While the site dates from the Yuan Dynasty (1271-1368), only a few structures are from the Imperial era and were part of an 18th century renovation.

Nestled between the academy and the school is the entrance to a shrine honoring Song Dynasty general Wen Tianxiang (1236-1283). He was a politician and poet serving in the Song court, but was forced into military service against the Mongols. He proved to be a decent general but was eventually captured by the Khan’s forces.

According to local legend, Wen was imprisoned in this courtyard while the Mongols tried to change him. Wen refused and the Mongols executed him. The shrine honors Wen as a paragon of sonship and patriotism. You can visit the shrine by checking in at the office inside the gate and paying the admission fee of 5 RMB.

Jeremiah Jenne earned his Ph.D. in Chinese History from the University of California, Davis, and has taught late and modern imperial China for over 15 years. He has lived in Beijing for almost two decades and is the owner of Beijing on footorganizing history education programs and walking tours of the city, including deeper dives into the itinerary and sites described here.