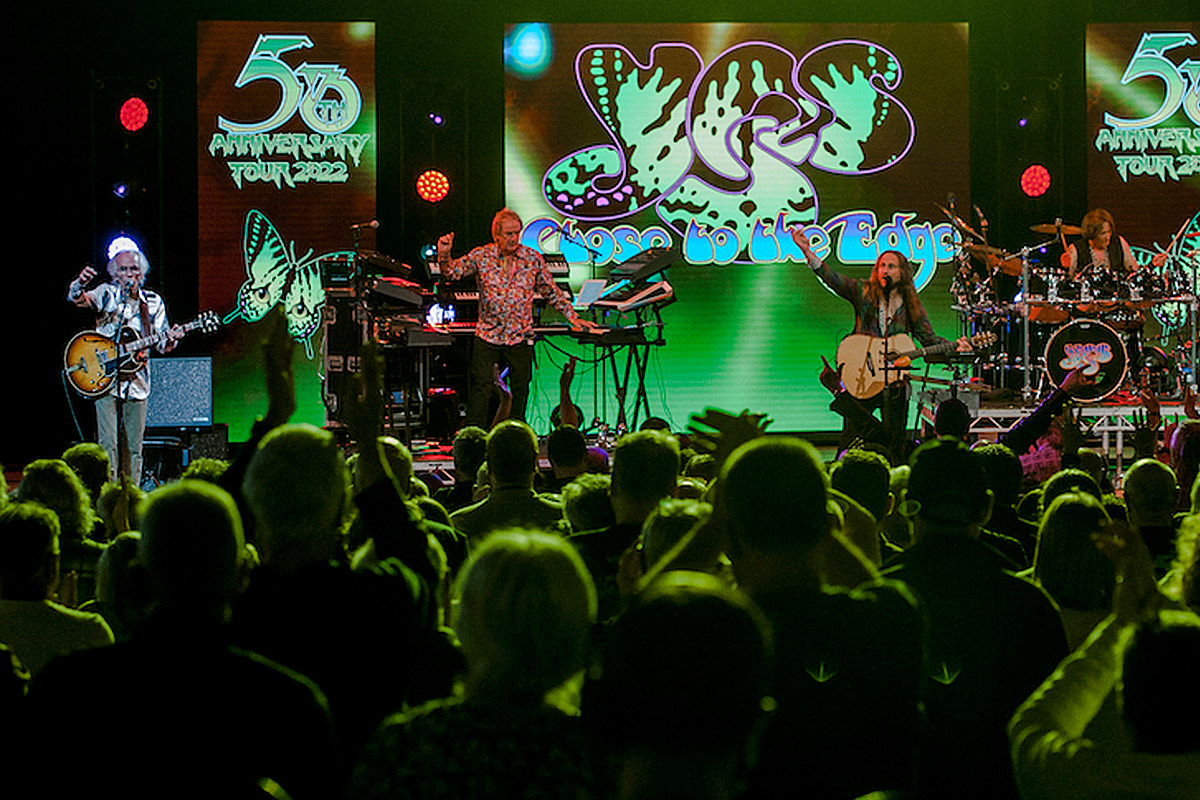 Why Yes Is Finally Playing “Close to the Edge” Properly

The members of Yes have always been known for playing things with precision. So it’s no surprise to learn that they are constantly finding new ways to improve what they do.

But in the case of their mammoth follow-up “Close to the Edge,” there’s a section that has dogged guitarist Steve Howe for decades. Although he admits in a chat with UCR that it’s something most fans might not even notice, he was always happy to fix it.

This is one of the things fans can look forward to during the group’s concerts. current tourwhich finds Yes paying homage to the 50th anniversary of the album by performing it in its entirety.

Howe recently spoke with UCR via Zoom to share some memories and stories from the period.

One of the things that’s legendary about the original near the edge period is how Alan White joined the band and had a few days to learn the set.
We four – Chris [Squire]Rick [Wakeman]Jon [Anderson] and I–we kind of dragged him through it. [Laughs.] We were like, “Okay, that’s what we’re doing. So, you just have to get on with it. It wasn’t like we were expecting him to know so well that we could play him. I guess that was the only help we could give him, it was a lot of commitment that we knew how to play. Well, in a way, we didn’t – because we had never played “Close to the Edge” on stage before. We played it in the rehearsal room, and then we played it at Advision Studios. So actually, we were under some pressure, but we had started to get used to finishing an album and going out and playing it because that music was relatively fresh and it was on our minds. Of course we had to repeat it, but Alan was thrown into the big bath. I guess that’s what got him the seat for the next 37 years. I mean, he came in off the cuff and played some really hairy stuff, with lots to remember. He did an excellent job.

At first we just dragged it through. We kept the momentum going for him to follow us, but soon enough he got it all figured out and became an equal contributor to the band’s arrangements and sound – you know, whether it’s up, down, slow or fast , because there was so little technology at the time that it was all done in a strange sort of benchmark of naive musical potential. But because you had to play it, you just had to have your fuzz, your wah-wah, your delay, your amp and some guitars – and you kind of had to get started on it. Fortunately, Yes launched so quickly in America that we barely knew what it was like to hit the clubs – you know, because it took off really quickly. We were doing our own shows, I think, even at the end of the second tour, because we had a nice reaction. This allowed us to think about stage shows quite differently.

Do you think it made it difficult for the band not to spend more time in the clubs?
Oh no no. You know, we had already found a level of success in Europe that we wanted to duplicate in America. People said, “Well, you’re going to have to work a few years to open up America.” We said, “Of course, okay, we’ll do it,” but we were happily gifted with kind of an easy platform — partly because we opened for Jethro Tull on the first tour. People who saw Tull saw us and they said, “Who are these guys? Are they mad? By the time we came back with Brittle, we insisted that Atlantic take their finger off, that’s kind of what we told them. They made and edited “Roundabout”, which allowed us to broadcast and all that kind of stuff. All in all, it was a remarkable ascent.

Put yourself in the shoes of these fans, when you look at what Yes has done now with near the edgeyou wonder, “Were these guys crazy?”
Oh yeah – especially when we had to rehearse for the UK dates. I told the guys, “You’ll be surprised when you listen to the near the edge album – even though we played it a few years ago – how fast some things are. Let’s try to keep this momentum through this music. One of the things I want to talk about is that we really have a wonderful surprise that maybe no one will notice. For the very first time, we’re playing the end of “Close to the Edge” in the right key. Now, for 50 years, we’ve made a pretty drastic key change at the very top of “Close to the Edge.” We lower the entire final section of the song one whole tone. I always thought it sounded ugly, but I got used to it. I said to the guys, “Please this time, let’s not do this.” There was a bit of a shock and Jon Davison said, “How am I going to do this?” I said, “Well, I have an idea. I know my harmony very well there.

The good thing about my bass harmony is that it just keeps going up. So it gives you the impression that we’re not really avoiding that high note that’s coming. So what’s happening is we’re kind of aligned between Billy [Sherwood], Jon and I. Because I go up, it goes up and someone goes down. We can play it in different keys, but basically the key that’s different is the key change that Yes made, which took us to F minor, when the record never went to that – it went to G minor. I’m so thrilled and it sounds great when the three of us sing this part. It just sounds fantastic. I don’t know what it is, but it’s the verve or the energy that comes out of doing it right, once and for all. To say that for 50 years it’s [incorrect]. I hope people will notice it. They don’t really need to notice. Actually, I don’t know if anyone noticed it in the UK and Japan, but I think if I mention it, it might catch some people’s attention. They might say, “Well, actually, Steve is right. It’s rather good ! It’s not [a big change]; it’s just that it’s true! [Laughs.] That’s how we originally wrote it and it’s a joy to come back to it.

What else do you remember playing this entire album?
“And You and I” is a classic number to play. You can never play this dismissively. You know, it’s an engagement number and there’s a lot of emotion. We close the set with “Siberian Khatru” and we also gave it a good prep, so some nice things are happening in there. The album is a classic. It was never hard for Yes to play near the edge, but I think it’s been hard to play it really, really well and really polish it to be a wonderful album experience. I think we have it in a really nice place now.

Listen to Steve Wilson’s “And You and I” Remix

A look back at forgotten rock supergroups