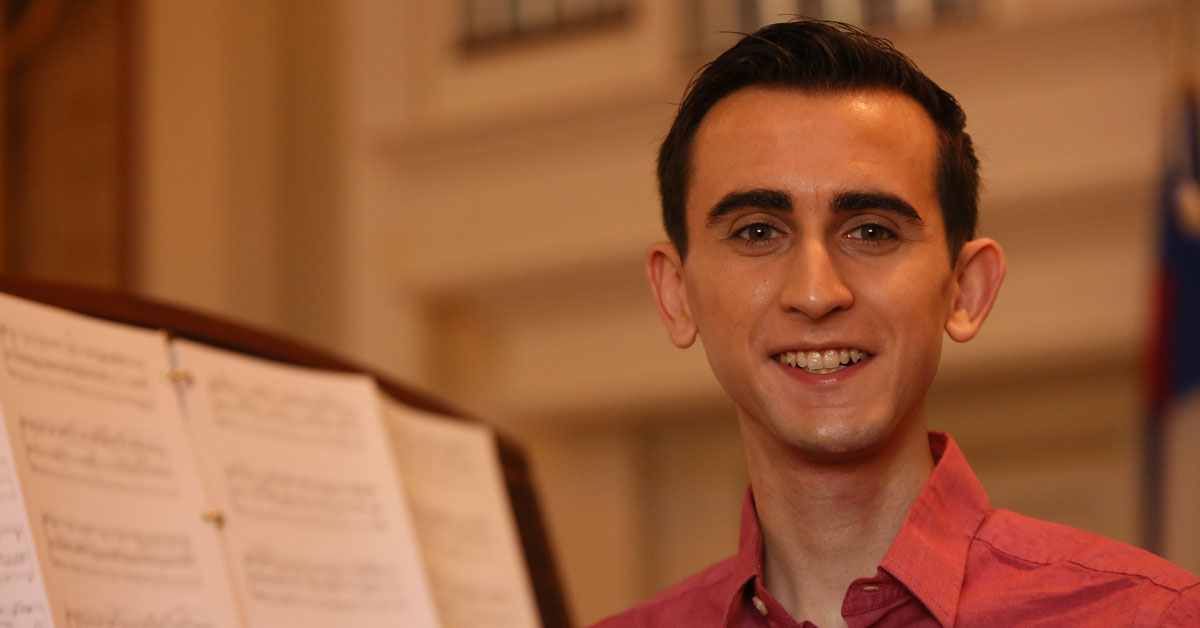 Like many people undertaking projects during the pandemic shutdown, Colin Carmody ’22 finally had the time.

Carmody, a double major in music and mathematics at William & Mary, had a long-standing interest in the organ compositions of his great-great-grandfather. This family member, William H. Oetting, worked as a church organist and music teacher who helped found what is now the University of Pittsburgh Department of Music.

Carmody decided a piece was of particular interest and researched the composition, which is housed with Oetting’s works in the University of Pittsburgh Music Library. After spending the stop combining three versions into one and smoothing out the score for the Sonata in G Minor, Carmody spent months rehearsing it in preparation for performing the piece at his main recital on February 26 at 3 p.m. Williamsburg United Methodist Church.

Carmody will also play piano and harpsichord in his recital, but the organ composition will be particularly significant.

Among the family and friends traveling from Northern Virginia or watching from a distance when he performs the new piece will be Carmody’s grandmother – Oetting’s granddaughter and an accomplished pianist. Also, few family members have heard Carmody play the organ or harpsichord because during the pandemic it has been more difficult to travel to Williamsburg.

“I’m delighted to be able to perform his work and give it, I guess you could call it, the world premiere,” said Carmody “since as far as I know the composer – my great-great-grand -father – was the only person who ever realized it apart from what will be me.

“It means a lot to know that my grandmother will be in the audience, so the composer’s granddaughter. …because I spoke with her throughout this process and shared things with her. And so I think she’s super excited, and it will mean a lot to share that.”

Music teacher Tom Marshall, in his 40sand year of teaching, helped Carmody learn composition and polish the intricacies during organ lessons. Marshall described the piece as “a grand and sumptuous work in three movements for solo organ.”

“Besides having the experience of teaching a wonderful student to play the organ better, it was a unique experience for me to watch Colin discover, unfold, edit and learn to play an unreleased organ sonata by his great-great-grandfather, William Oetting,” said Marshal. “This exciting and beautiful music must be joined by the most extensive mainstream of literature for any instrument, with extant examples dating from the 1300s to the present day.

“Colin has prepared a unique senior recital presentation playing three keyboard instruments to show what he has accomplished as a serious student here at William & Mary. Helping to guide Colin’s final endeavors with this music has been pure joy.

Working on it together for countless hours, Carmody said he and Marshall know the piece inside and out.

“He’s been so instrumental in helping me put it all together, both as a motivator but also as an advisor on this project,” Carmody said.

Talking with family members, Carmody realized that many of Oetting’s compositions had been passed down through the family. But almost everything is now in the special collections of the University of Pittsburgh Music Library.

Carmody visited the library during his college visits in high school and saw huge stacks of Oetting’s papers there. Now that they were digitized, he accessed the sheet music online to start his project.

Carmody, who also sings in several bands in addition to playing instruments, inherited his very musical family. He began piano lessons at the age of 5 and took up the organ in high school, at which time he began researching Oetting’s work.

He found at least 50 pieces, most of which are unpublished.

“It means so much to me since I have this family connection to it,” Carmody said. “He has a smaller repertoire of works just because I think he started with composition and would do a bit here and there since he was a church organist, just like his father and grandfather.

“And so he was doing a little for the church here and there. But most of the time he was a music teacher. He helped found what is now the University of Pittsburgh School of Music. And so his main job was to teach music, rather than to compose.

Family members give the impression that they all viewed Oetting as a composer rather than a teacher, Carmody said, even though all research points to teaching as his main profession and main source of income.

Carmody began his work on the Sonata in G minor in three movements by making a hard copy of each of the three versions he found. He took notes for small revisions, then composed all the notes to make a complete list.

“There are definitely changes, but it’s pretty similar,” Carmody said. “Once I had that first one, it became easier to edit the second one based on what I had already done with the first one, and then edit the third edition.”

Oetting began composing the piece in 1900 while studying in Berlin for a year. He wrote the third version, adding a revised third movement, in 1919.

By analyzing the notations on the scores of the three versions, Carmody believes he has pieced together the order in which Oetting wrote them, and that at least some of the notes represented playing on different organs.

“I created my own edit that sums them all up,” Carmody said. “Interestingly, the third version, as it’s called on the website, has a completely different third movement than the other two versions.

“I suspect he didn’t really have an idea. And later, when he came back and was reworking things, he said oh, I know what I want to do here. And he got the idea for a new third movement and replaced it.

Carmody is investigating the possibility of publishing the article.

“If released, I’d love to hear other organists play it around the country, maybe around the world,” he said. “But it could definitely be cool if there are other interpretations that come after me.”

Carmody composed for his music department honors project a work for orchestra which he conducts and which will be performed in March, and last fall he won first place in the concerto competition of the university division of the Virginia Music Teachers Association. After graduating, he plans to consider graduate school.

“I’m interested in looking at either my own music composition or my music theory degree so that I can combine music and math,” Carmody said, “since there’s been quite a bit of mathematical work behind the approaches music or approaches to music.

“So that’s what interests me, which in some ways is a bit different from this particular project since that wasn’t the approach taken by my great-great-grandfather at all. But researching his music in a way helps me connect a bit more to the existing musical world that is out there.